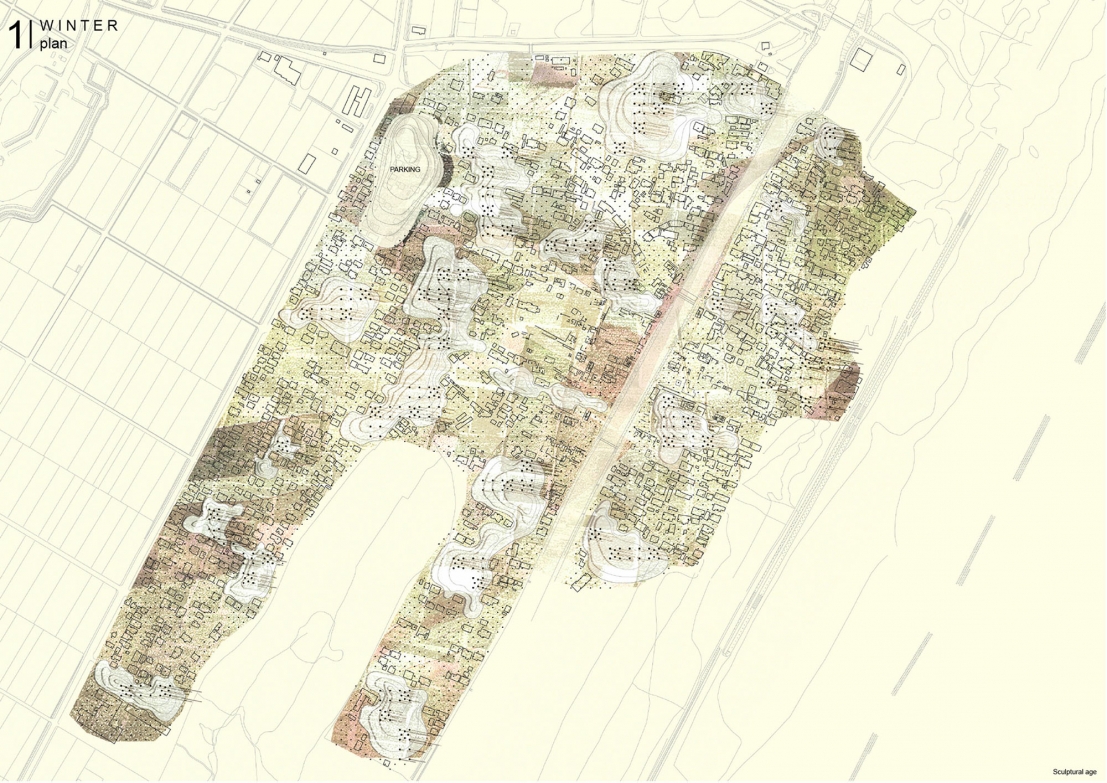 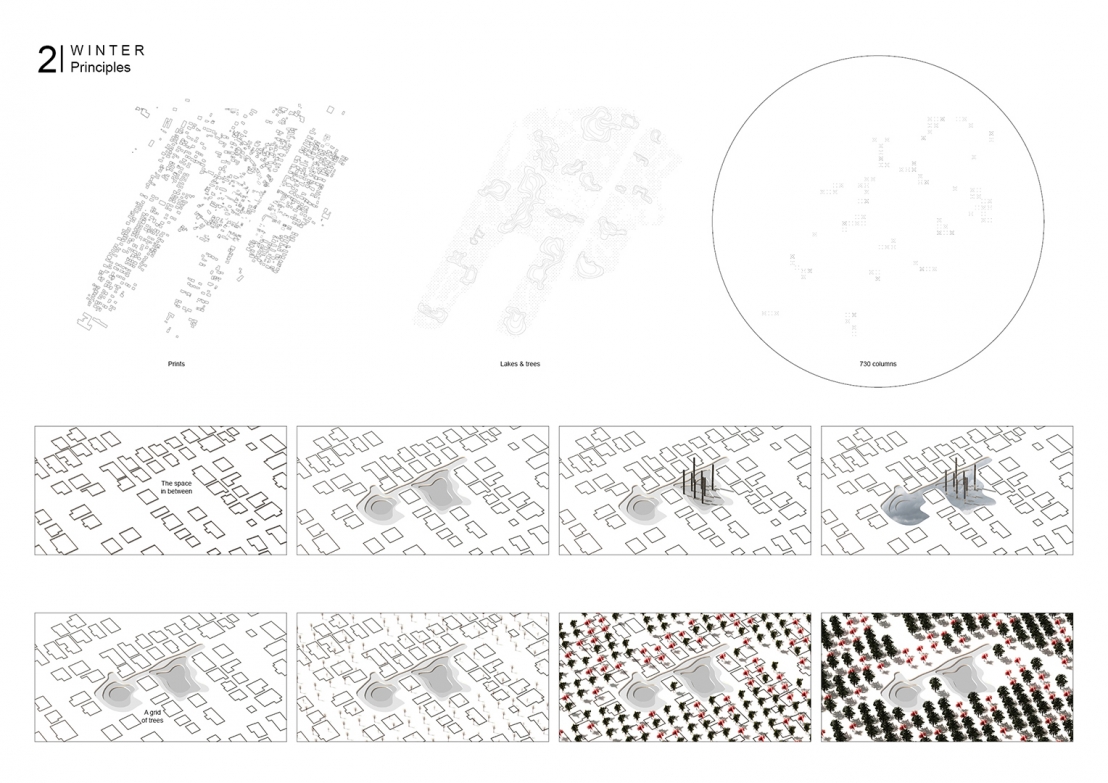 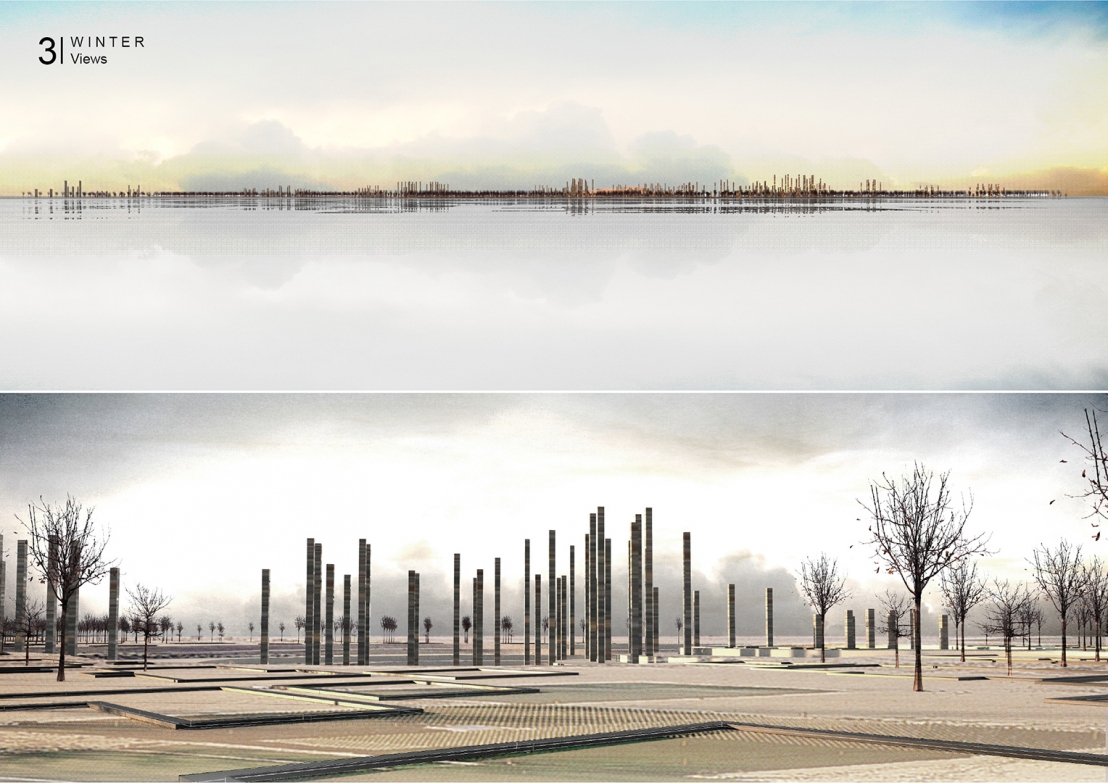 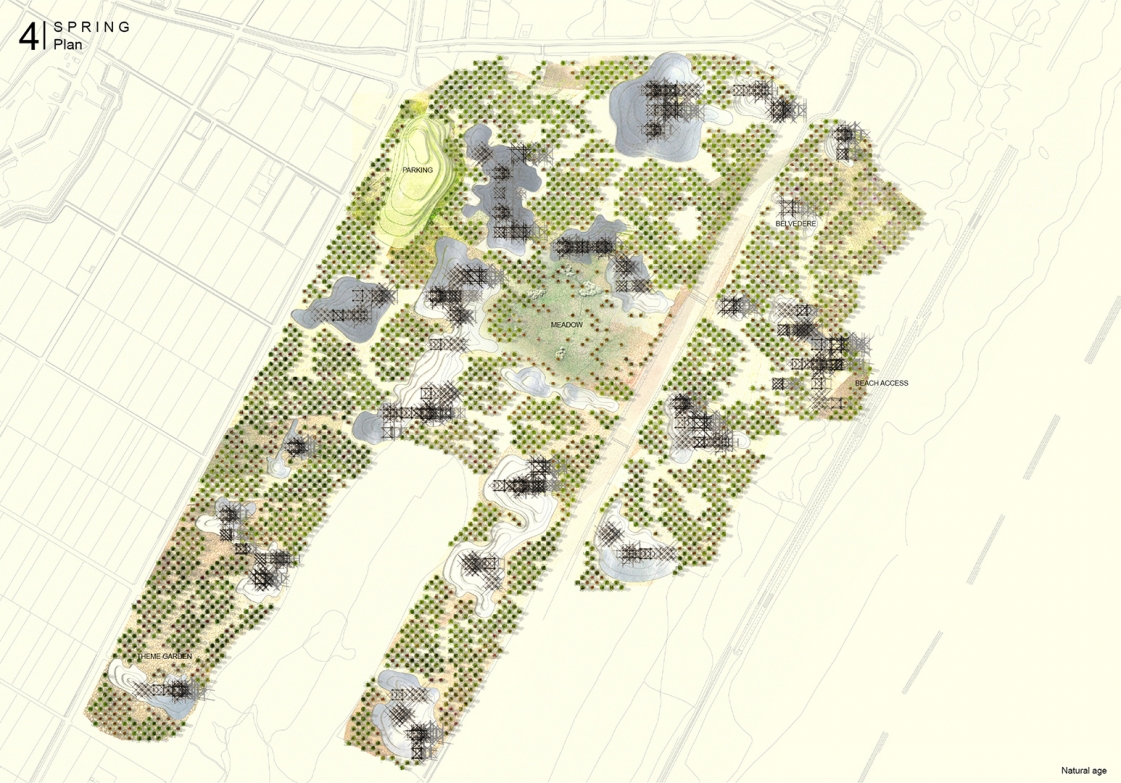 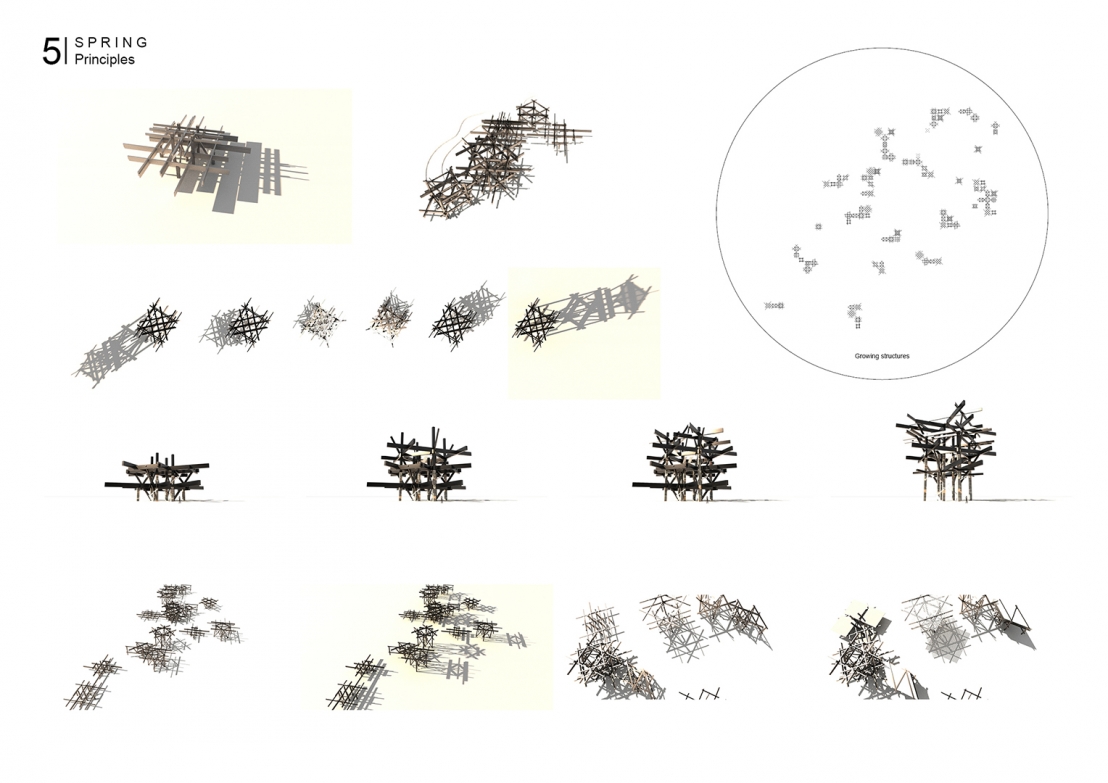 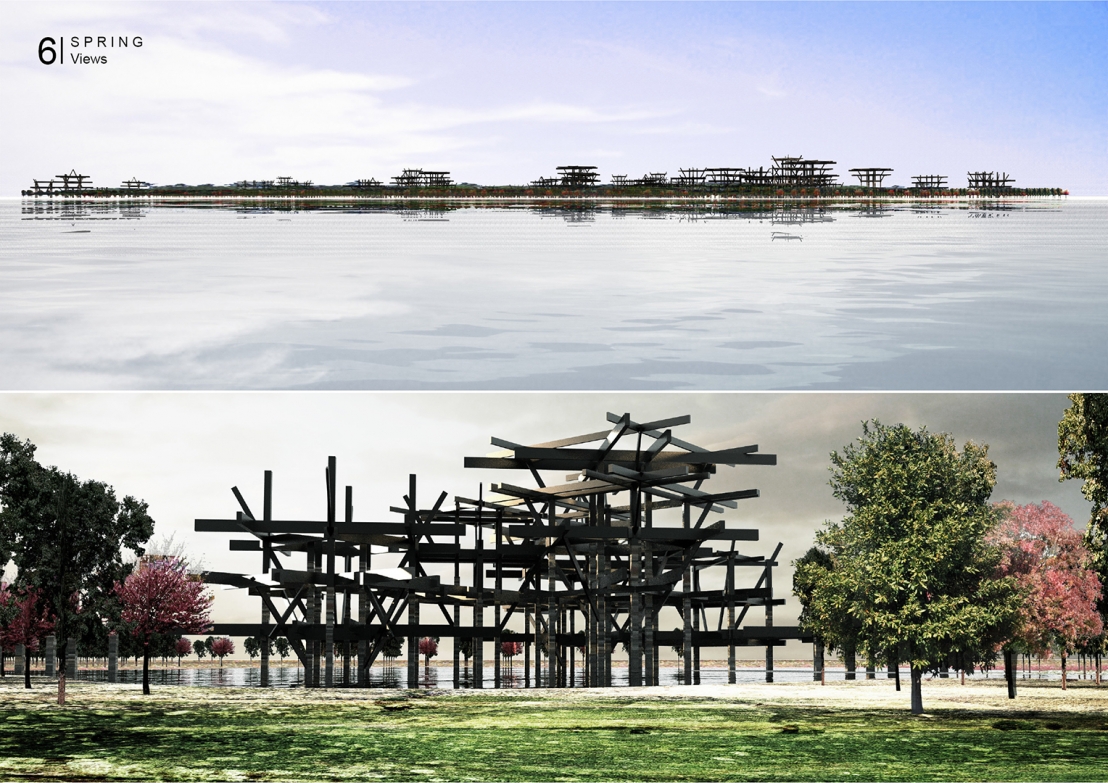 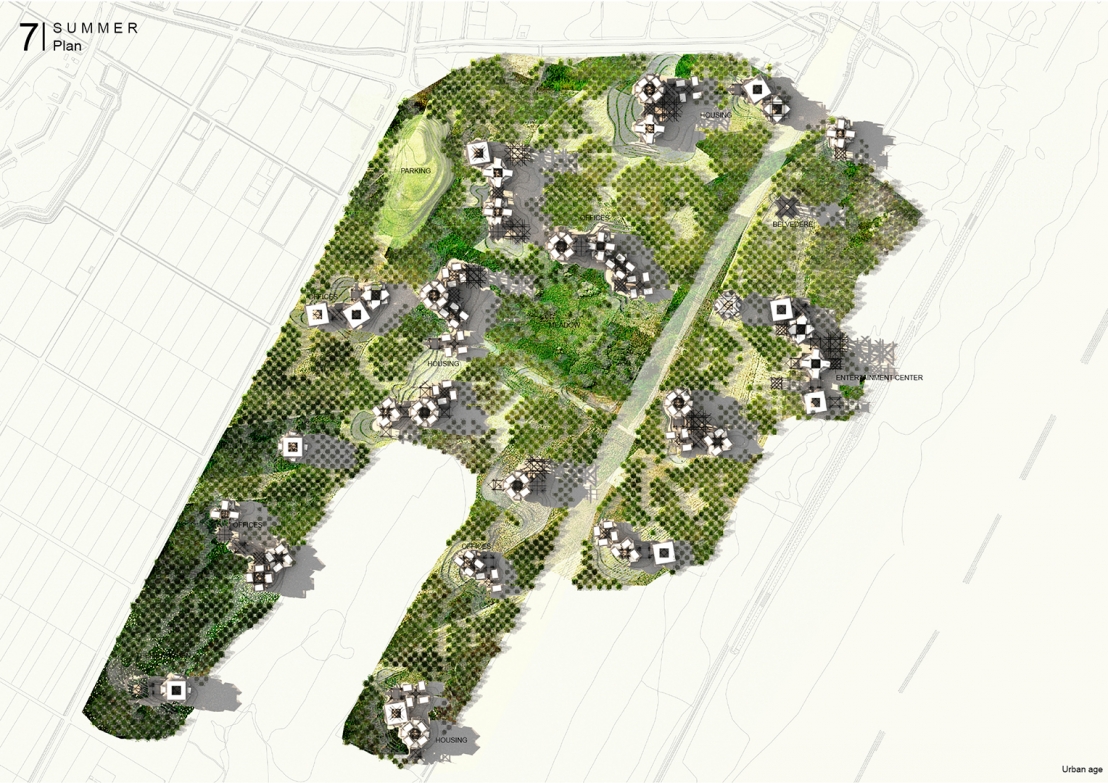 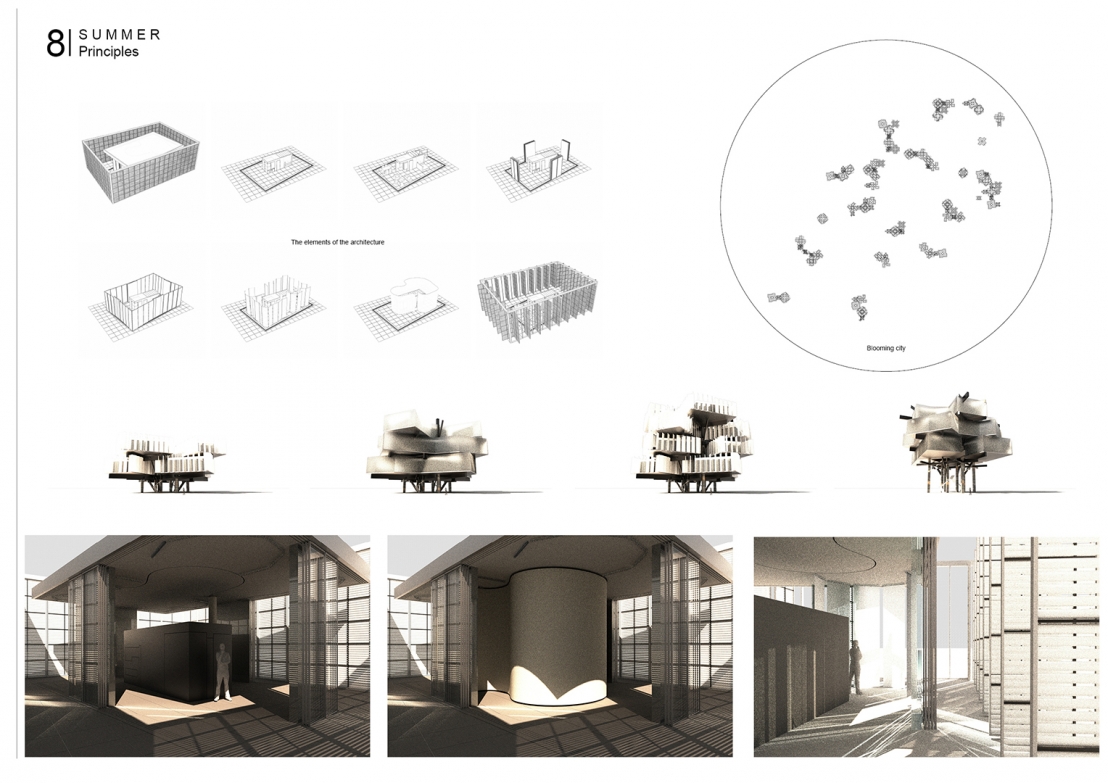 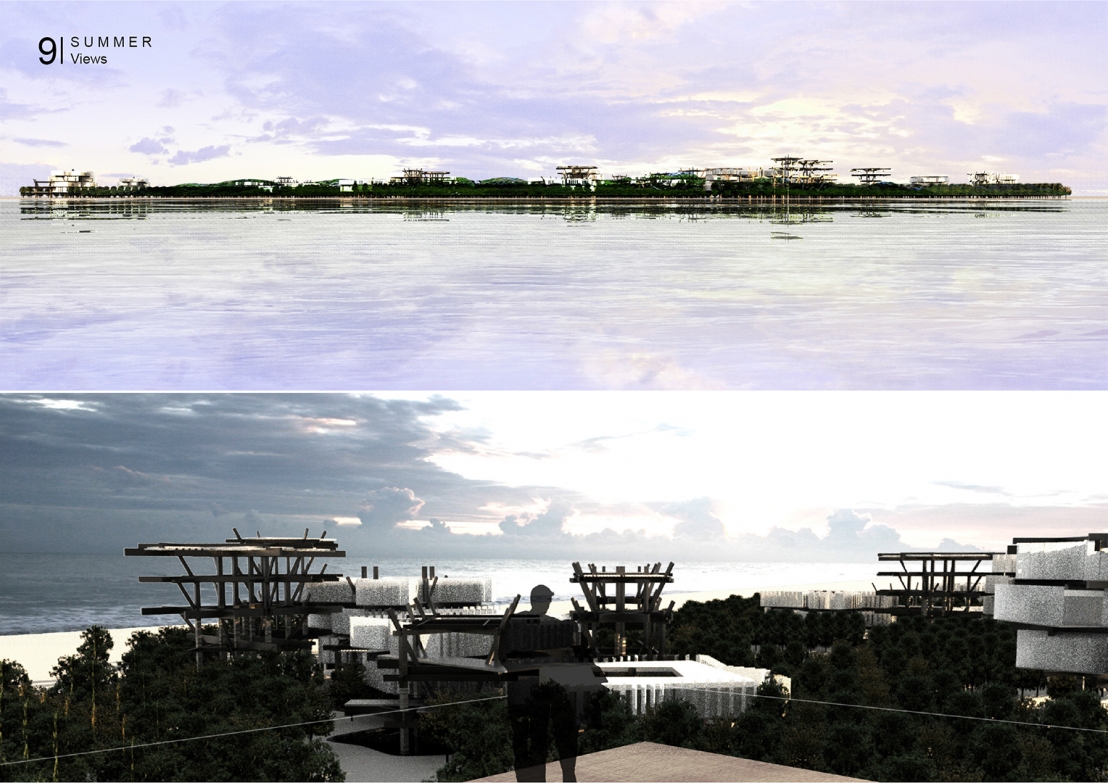 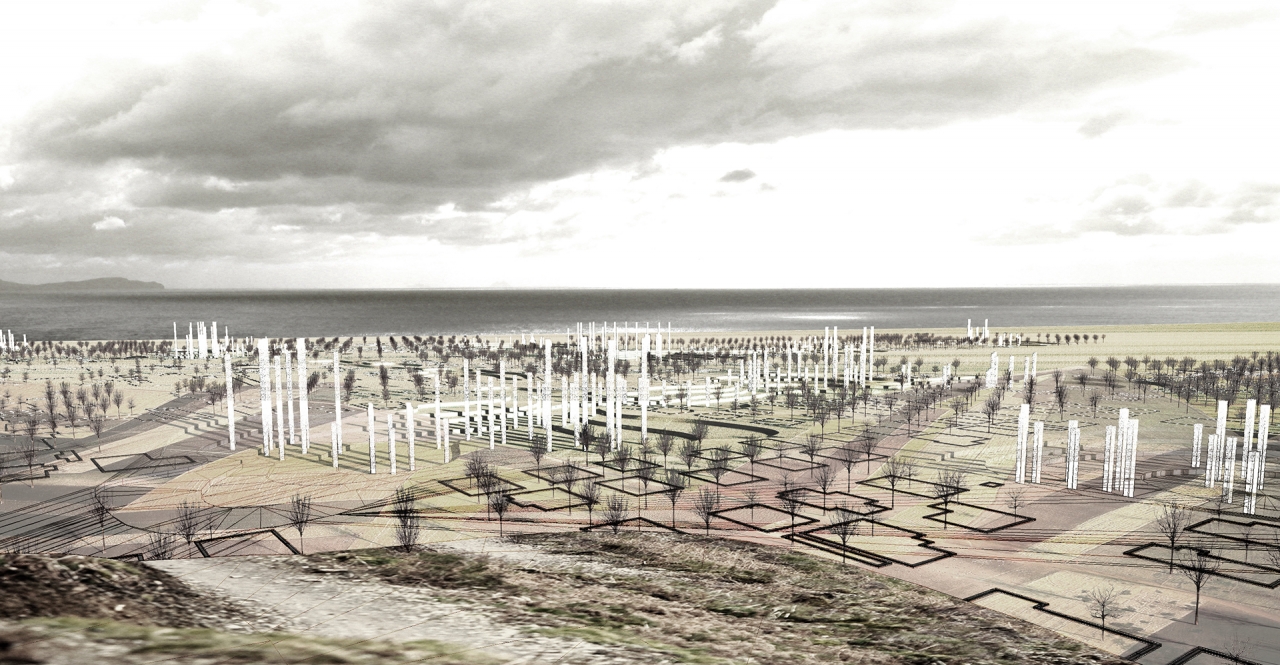 This project explores the process leading to the foundation of a city in post-tsunami Japan. Rebuilding the coast of Sendai after its complete destruction by the 2011 earthquake is a grave decision because it is taken for granted that natural disasters hit the country every 50 years. Also, tsunami specialists underline the difficulty for the Japanese population to “learn” from past disasters and their tendency to rebuild more or less the same towns in the same exposed areas, leading to further devastation. With these points in mind, Tohoku University (promoter of the inter-university design workshop on the future of the Sendai Coast) explained that the site was meant to become a place of memory and recreation, not a place of residence. In addition, the project was to include a major infrastructure, an elevated road designed to protect the inland by stopping the waves.

The content of this program raised two major questions: was such infrastructure going to protect the inland territory, or was it going to condemn it by disconnecting it from the shore? And was the coastline of Sendai going to become an attractive place if inhabited by a park constrained between a wall and a menacing ocean? This project proposes a radically opposite approach. First, it refuses the infrastructure, therefore accepting the natural disasters as a major design constraint.

Second, it aims at installing a town on the site, which integrates by design the issues of mourning, remembering, redeveloping and surviving future tsunami. These characteristics become the conceptual backbone of a new type of building, elevated 5m above ground, expanding spatially like tree branches, opening and closing like flowers, drawing rich and complex shadows on the ground.

The site chosen is the Arahama fishing village, which was almost completely erased by the recent tsunami. Today the footprints of the lost houses are the only traces of the disaster left after a year of site-cleaning. These footprints constitute the pattern of a new ground, on which to plant new Arahama.

The project is conceived in three stages, or “ages”, each age corresponding to a stage of development of the future city.

During the first stage, or “sculptural age”, the site is turned into a memorial by creating fields of columns emerging from a series of depressions on the ground. At this stage, a grid of trees is also created, covering the entire village. Two tree species are planted, only one blooming in the spring. The blooming trees are systematically located wherever the grid hits the house footprints, and will remind their presence once the footprints are gone. A hill including a parking garage is created in the northern corner of the site; visitors arriving by car emerge from the parking at the top of the hill, getting an overview of the site with the sea in the background.

During the second stage, or “natural age”, the memorial becomes a public park. The footprints are removed, paths are created, sea salt is evacuated from the soil and vegetation grows. The depressions are turned into lakes, and architectural structures are built on top of the memorial’s columns. Most of these new structures remain unoccupied at this stage, standing in the middle of the lakes and mixing with the trees for contemplation. During the final stage or “urban age”, the park turns into a city: living and working spaces are built within the architectural structures. The facades of the buildings are envisioned as series of operable louvers of different styles and colors. The main paths become roads. The system eventually expands beyond the limits of the former village. This presentation shows a full cycle, from one tsunami to the next, covering approximately 50years. The natural disaster and the three ages of the city are presented as four symbolic seasons of the cycle: autumn symbolizes the tsunami, winter the sculptural age, spring the natural age and summer the urban age.