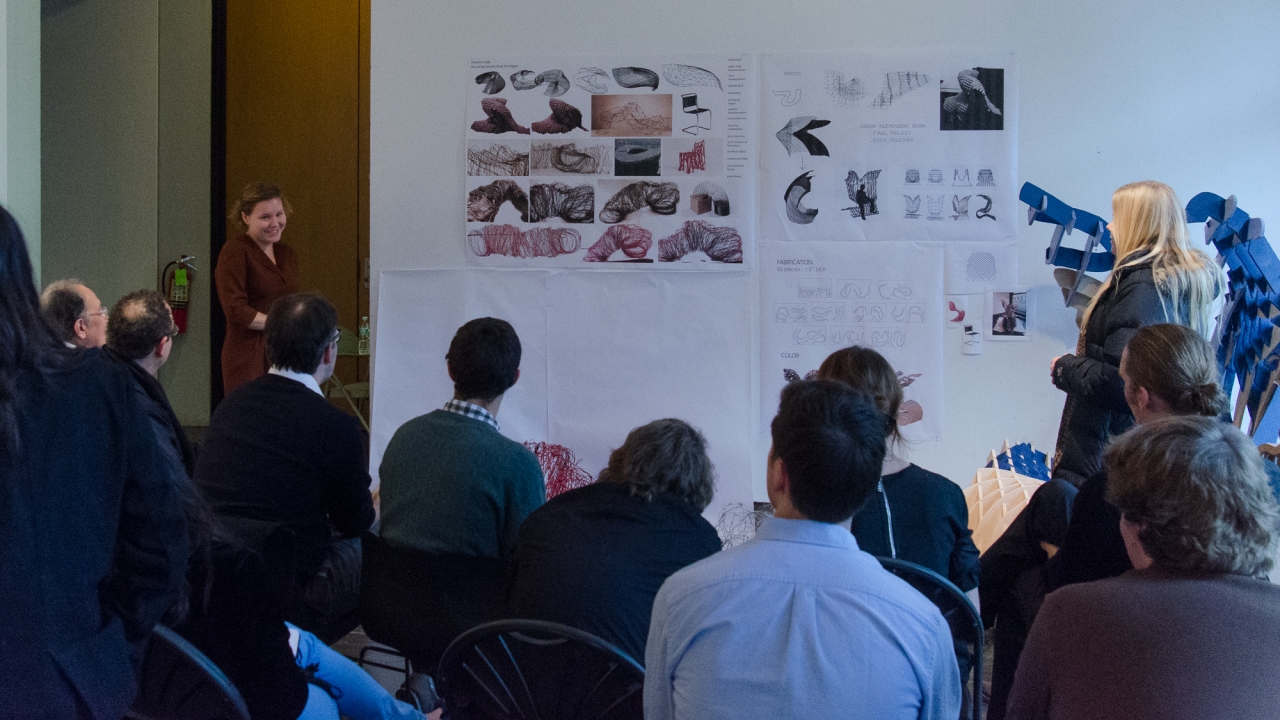 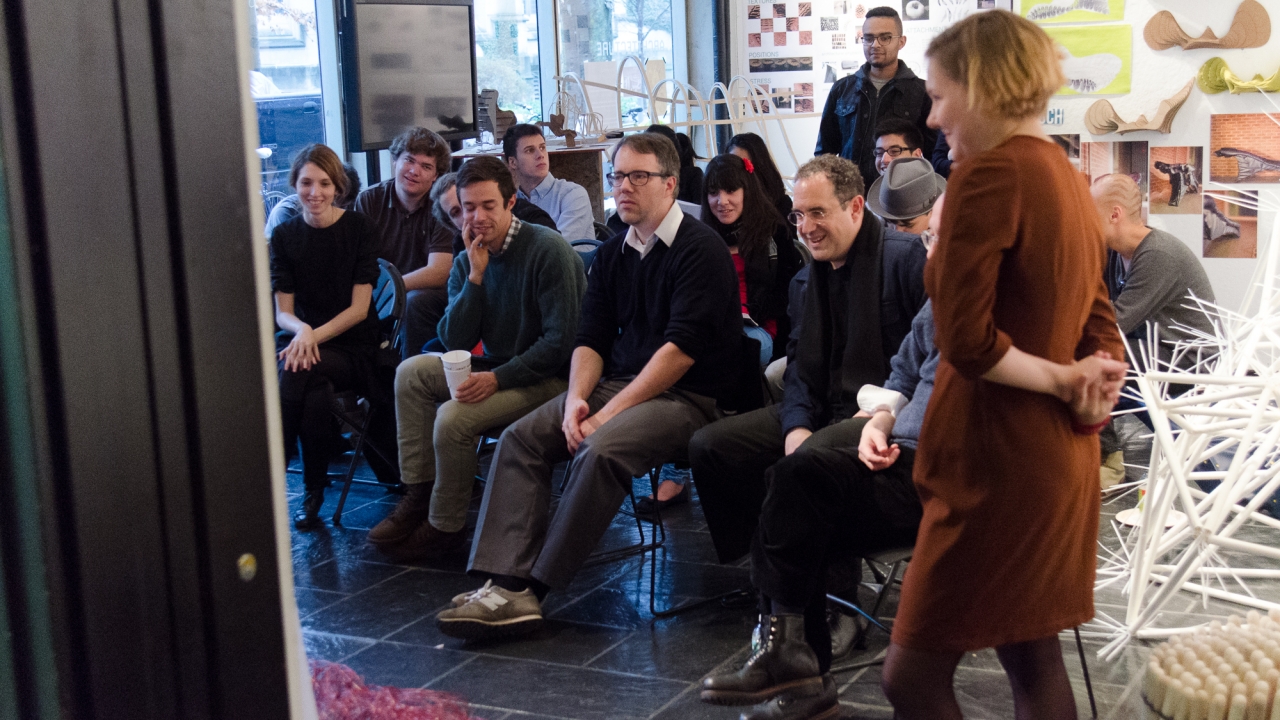 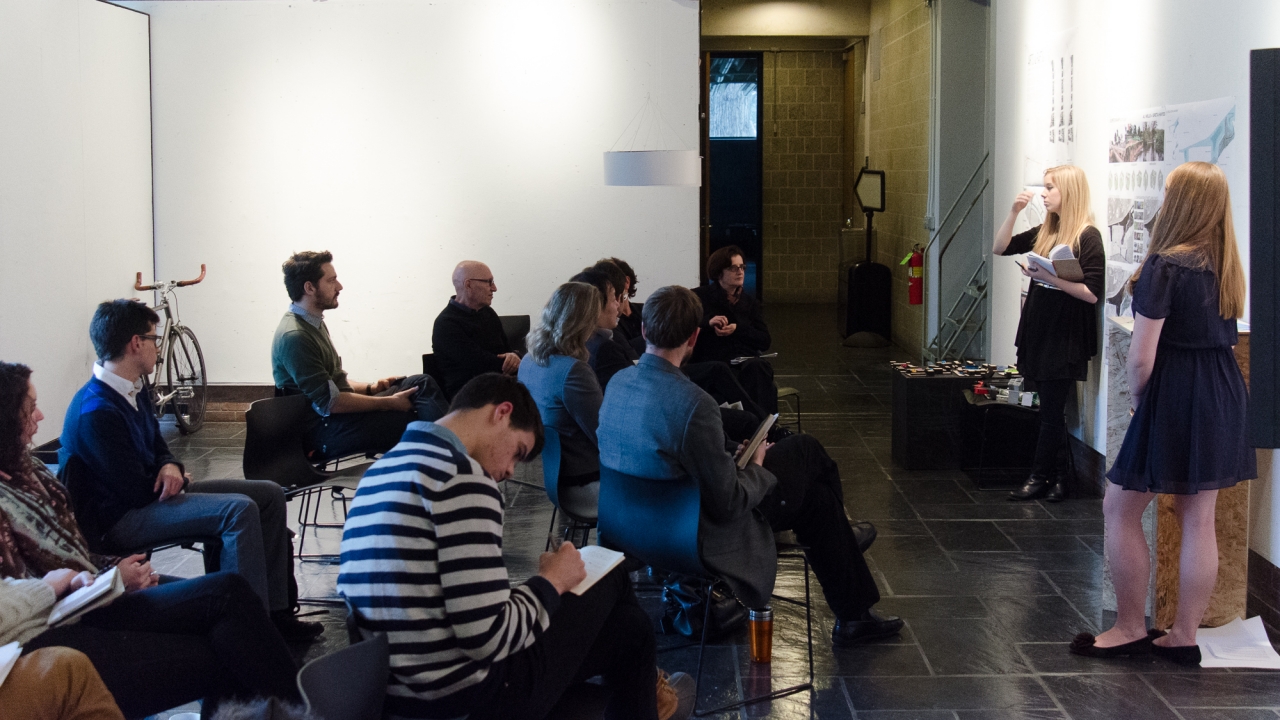 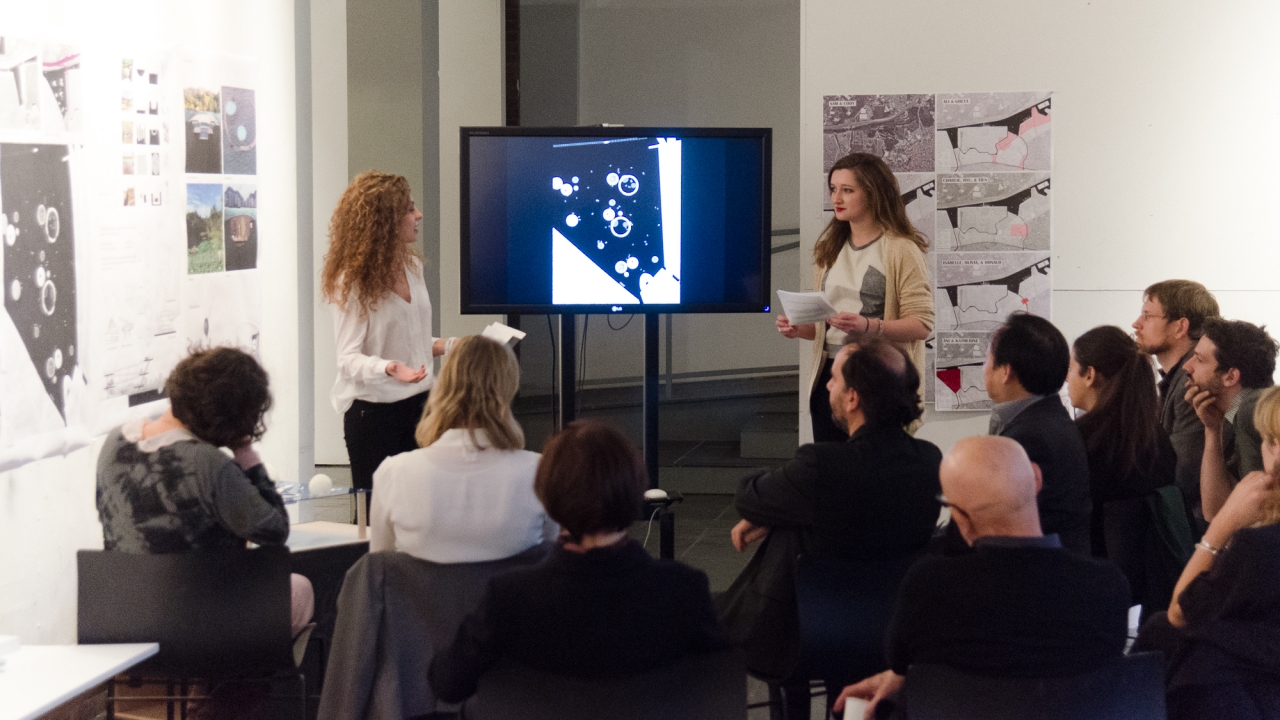 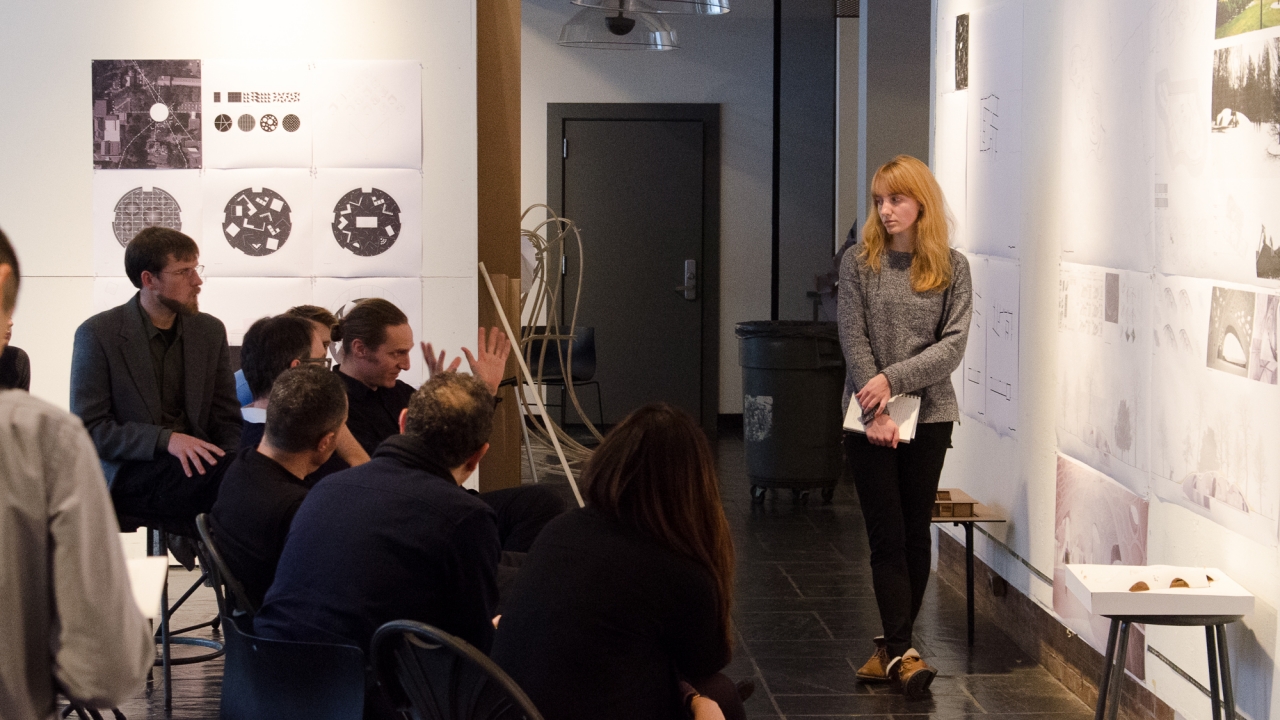 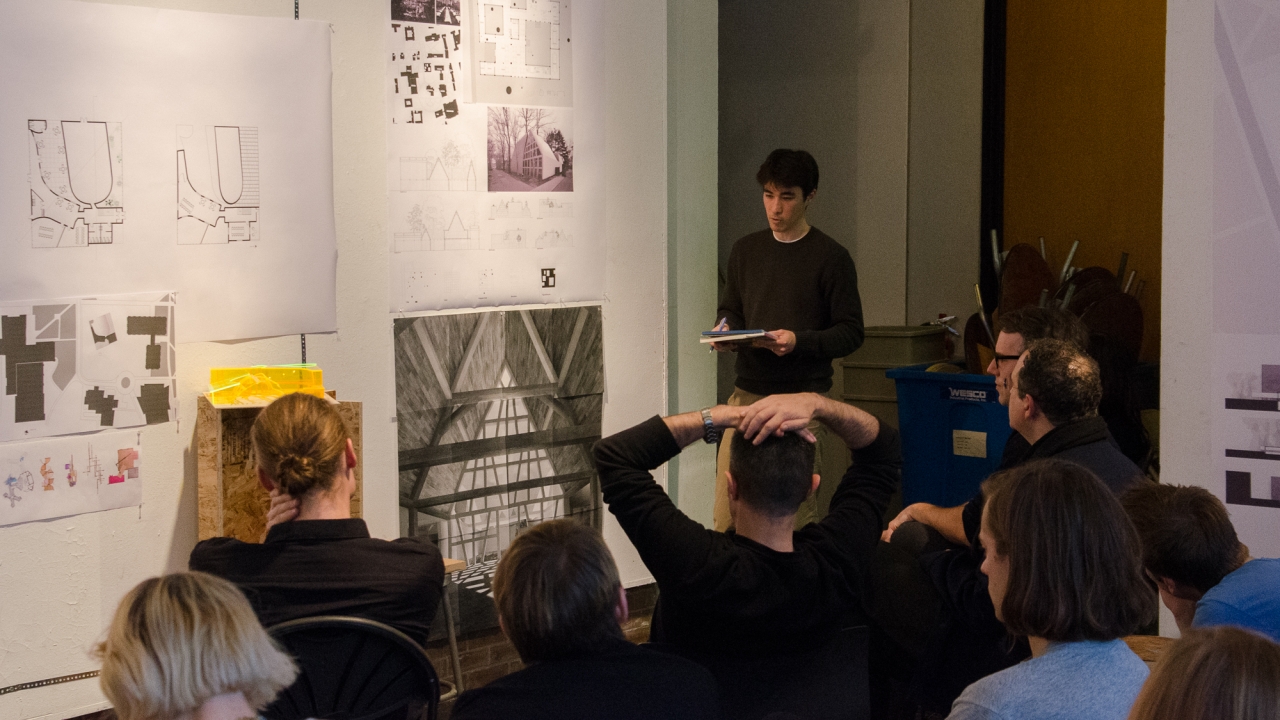 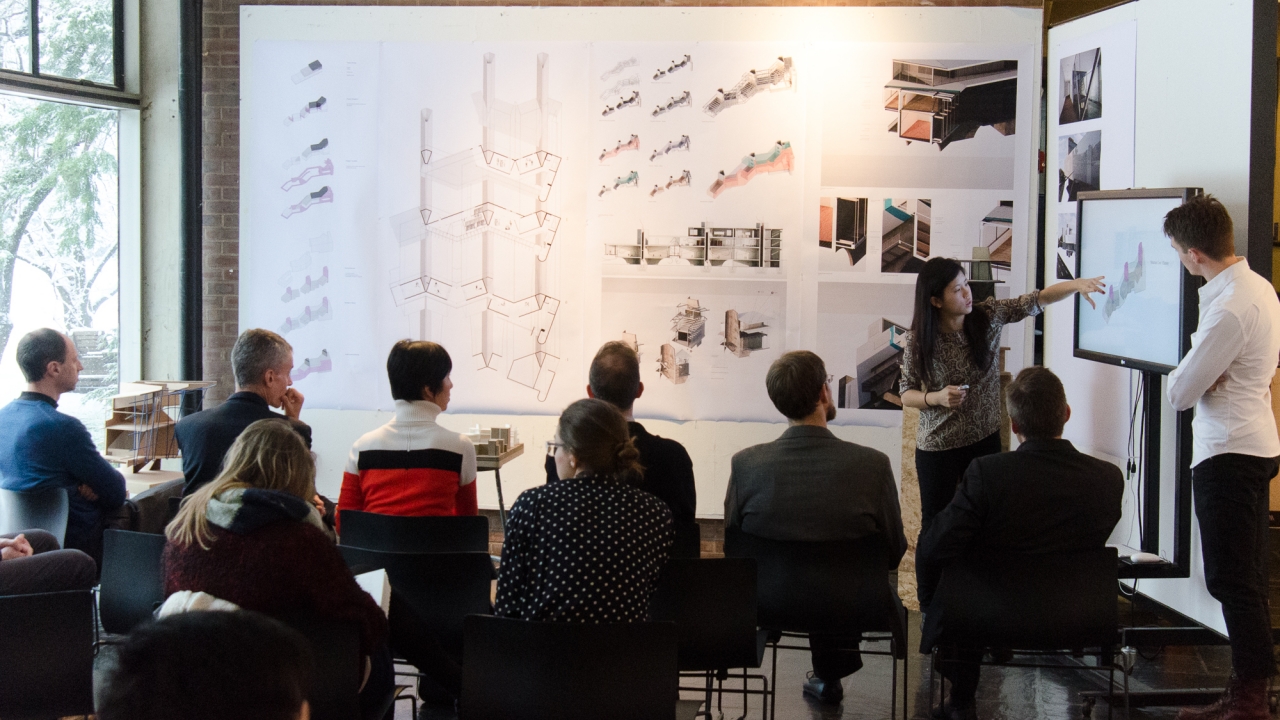 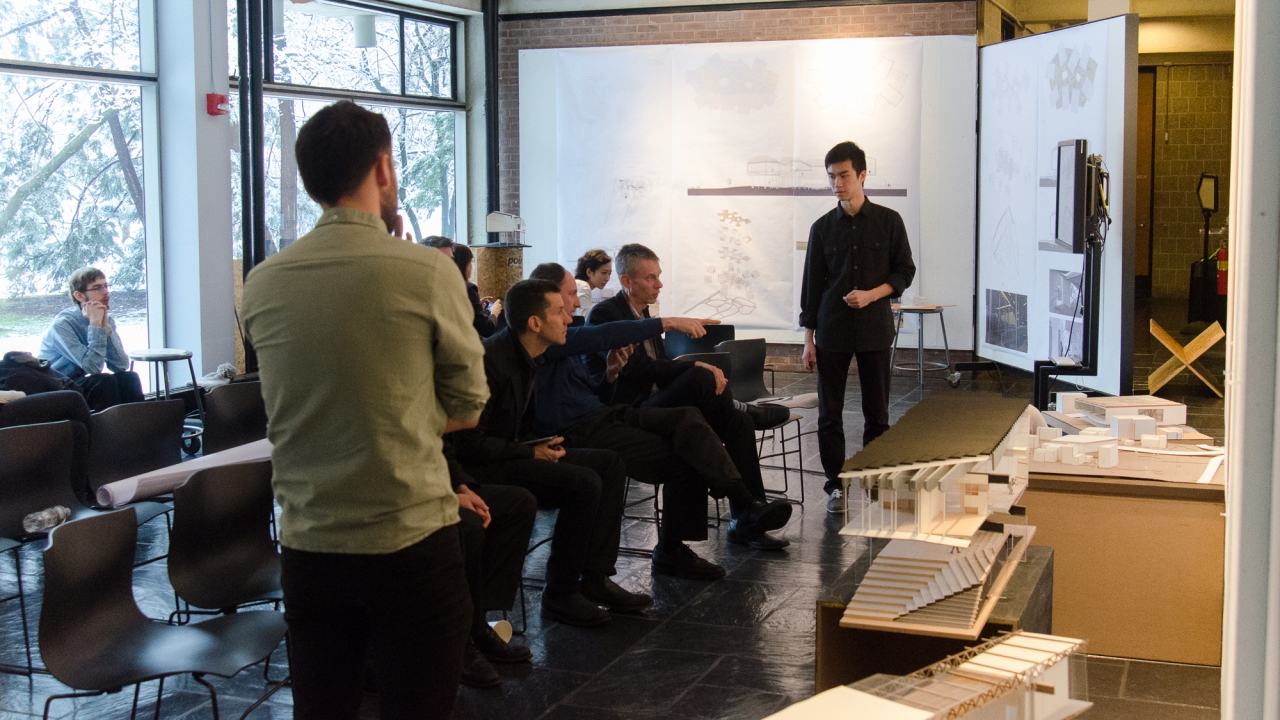 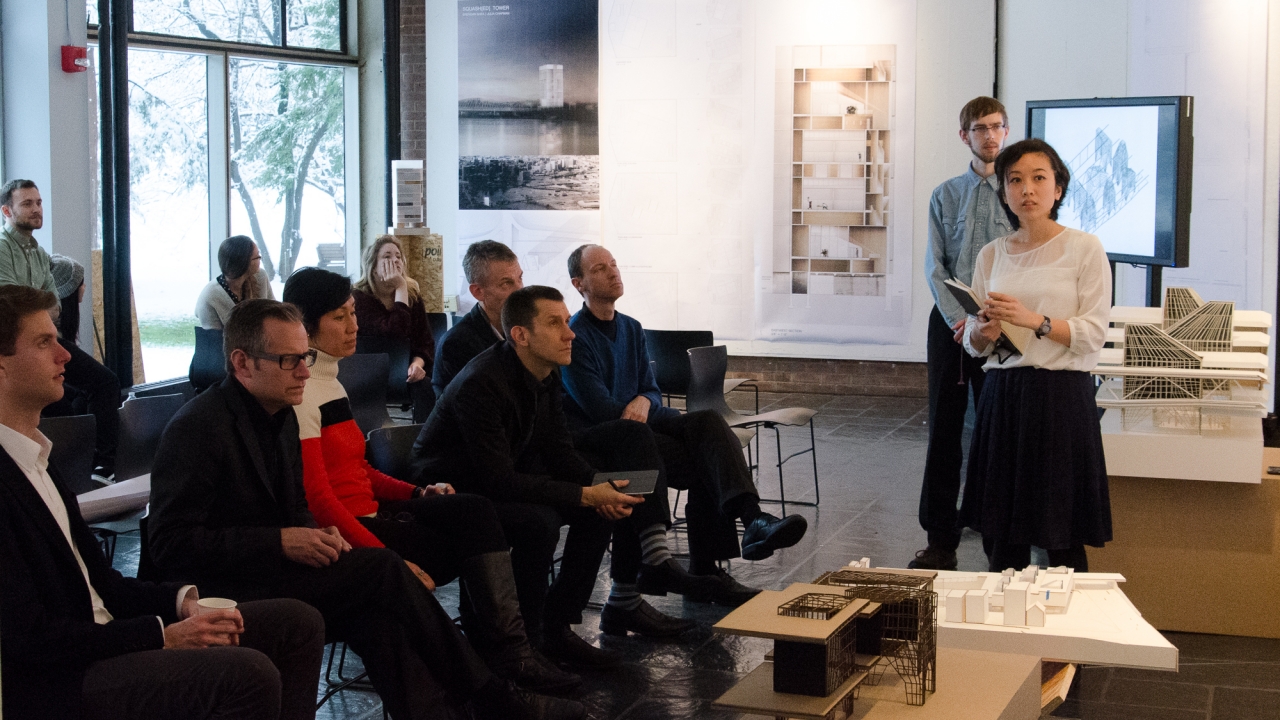 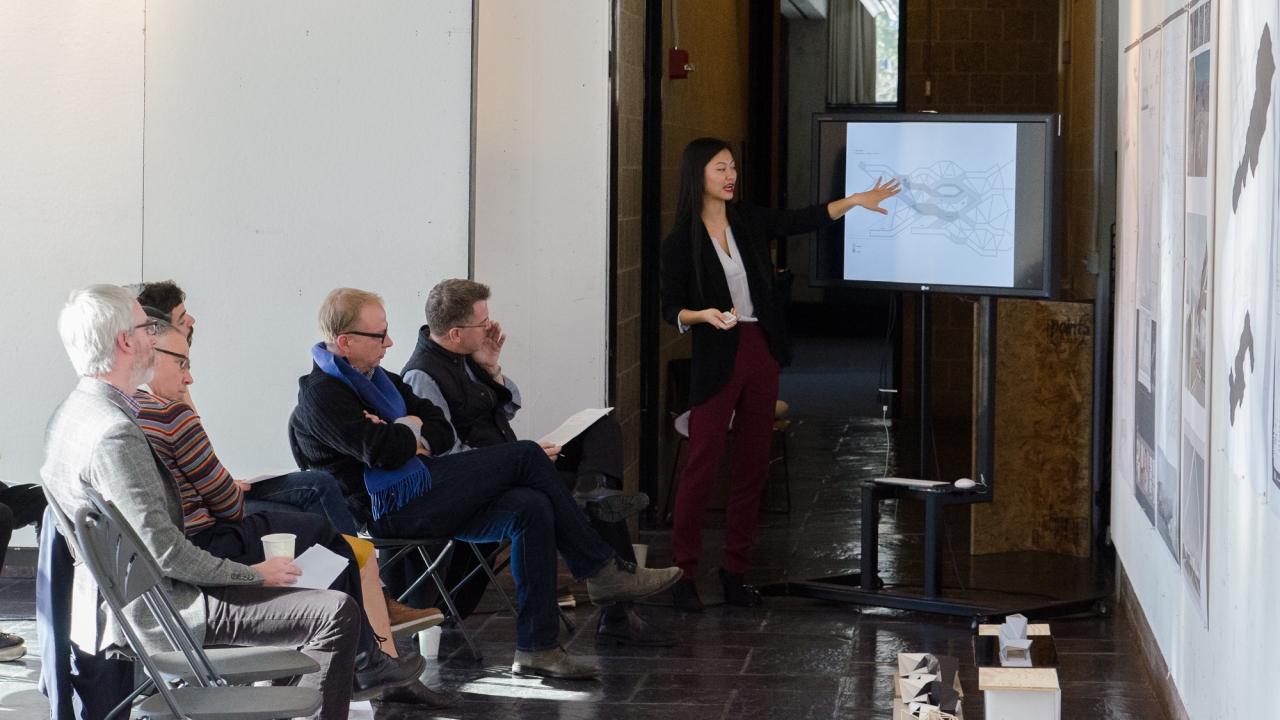 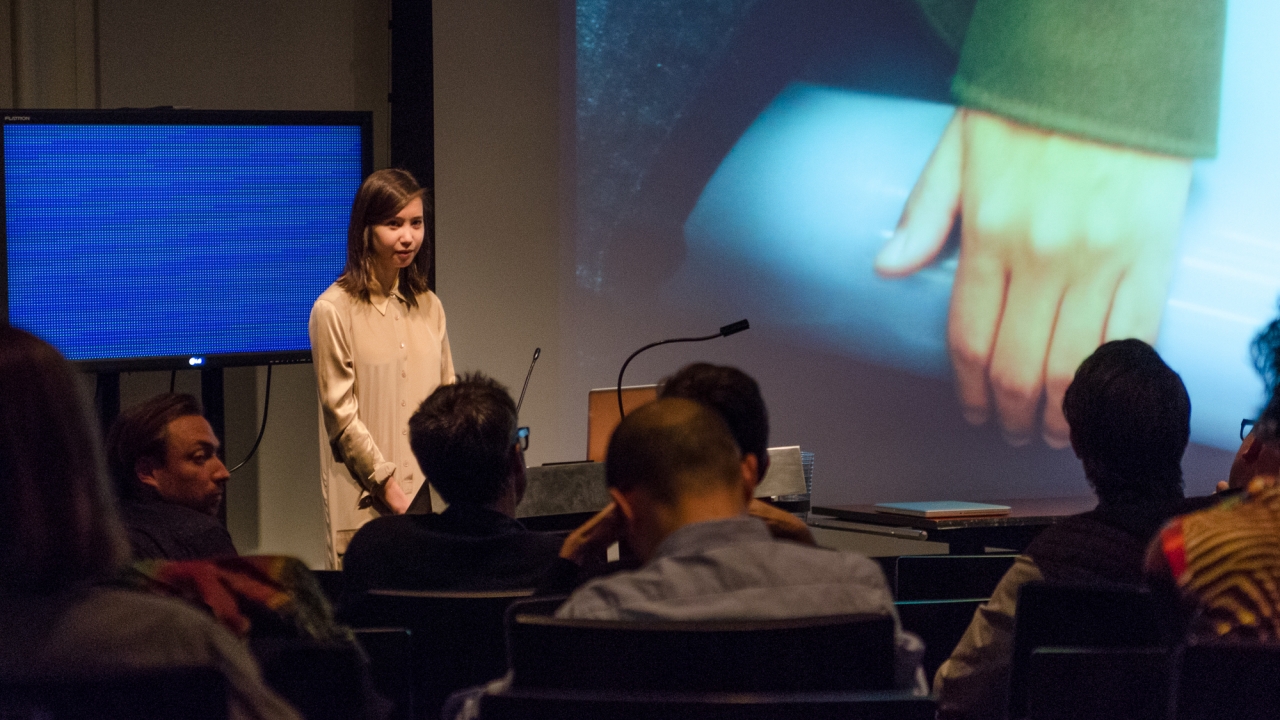 From December 9 through December 13, the Fall 2013 Design Studios will occupy the Architecture Building.

JIW: Junior Independent Work - JESSE REISER - "Throughout the history of modern architecture, furniture has served as the most concise representation of an architect's design principles. While these principles could be applied to projects at any scale, the social, material, geometric, and aesthetic forces underlying an architect's disciplinary project here find their most poignant resolution.  Given the relatively small scale of the endeavor, it is the intention of the studio that each architect will produce a piece of furniture at full scale. This does not imply an uncritical return to a craft ethos (though craft as a cognitive and technical procedure is very necessary) rather it suggests a form of ‘management’ that would marry techniques and materials derived in the computational environment with material practices." Jurors: John Nambu, Axel Kilian, Michael Meredith, Ryan Johns, Michael Overby, Dorit Aviv, Neil Cook.

404: Senior Independent Work - MARIO GANDELSONAS - Liquid Landscapes: The 21st Century Water park - "The 2013 Senior Joint Studio has been developed in conjunction with the Faculty of Architecture, University of Sao Paulo. The site for the studio will be San Miguel Paulista, one of the Eco ports of the Hidroanel, a major urban infrastructural project, a 170 km. water ring in Sao Paulo. The program for the first part of the studio will be the “reading” of the work of the Brazilian landscape designer Roberto Burle Marx within the context of five hundred years of Western and non-Western garden design and the program for the second part will the design of a water park as a new cultural and entertainment node for the Sao Paulo metropolitan region."  Jurors: (David) Dai Song Zhuo, Pablo Lorenzo Eiroa, Gisela Baurmann, Elizabetta Terragni, Ivi Diamantopoulou.

501: Architecture Design Studio - MICHAEL MEREDITH - TBA
medium (technical support) + convention (artistic genre, typology, history) + play (!@#?) = Architecture
Medium is how we conceptualize and work through a project (i.e. form, function, material, program, context, and so on). Convention is how we situate and evaluate the work within the discipline. Play is something else. History has proven these elements to be highly unstable, of course every generation tasked to rewrite them and each of these with their own specific outcome or emphasis in mind. While convention may offer some protection against the anxiety generated by change, medium continually produces new enthusiasms and frictions which exacerbate the improvisation of play. This introductory course presents the discipline of architecture through a series of interrelated discrete exercises. These problems are not meant to represent the synthetic totality of the discipline, rather an overview of a few important aspects, points of architecture that help construct a self-conscious framework, allowing for the students to individually connect-the-dots, providing a foundation for further development.  Jurors:  Esther Choi, Axel Kilian, Forrest Meegers, Jesse Reiser, Alejandro Zaera-Polo.

503: Integrated Building Studio - PAUL LEWIS - "Global warming and sea level rise, made acutely palpable by Hurricane Sandy, presents a distinctly different motivation forcing a reconsideration of the relationship between the building, city and ground. One of the fundamental strategies for addressing the vulnerability of flood prone lands is to elevate buildings above more stringent base flood elevations. This studio seeks to move beyond technical solutions for flood mitigation and ask how this fundamental change--disengaging the building from the (toxic) ground--might sponsor the emergence of a new form of urban terrain, situated between lifted building programs and their associated street scape, that combines resiliency with vital forms of civic activity and human inhabitation. Moreover the ground itself will need to be developed as an part of an absorbent landscape, mitigating rising sea levels and the associated storm surges."  Jurors:  Tom Gluck, Mimi Hoang, David Leven, Peter Pelsinski, Mahadev Raman, Nat Oppenheimer, Forrest Meggers, Kevin Hayes.

505b:  Integrated Building Studio - STAN ALLEN - The Place of Houses, Revisited - "The question of the house is poised between the history of the discipline and the broader understanding of architecture’s role in public and private life.  Houses figure in film, literature and popular culture, as much as they have been an object of design and study for architects. The 1974 book The Place of Houses, by Charles Moore, Gerald Allen and Donlyn Lyndon, aspires to be a pattern book, a genre that traces its roots back to Palladio’s collection of Villa designs in the Four Books.  Pattern books present design expertise in a publically accessible and usable fashion. This is the ambition of the studio: to examine the place of houses today, and produce a working manual for the design of the house in the 21st century." Jurors: Michael Bell, Bradley Horn, Keith Krumwiede, Rosalyne Shieh, Ignatio Gonzalez Galan, Michael Meredith.

505a: Architecture Design Studio - LIAM YOUNG - BRAVE NEW NOW 2013 - "We have always imagined the spaces and environments of a day yet to come. As we flick through the catalogues of yesterday's tomorrows we see starry spaceship skies, moon base futures, jet pack ray guns, food in pill form, flying cars and xray specs and we wonder whatever happened to the futures we were promised. In these polemic visions we furnish the fictional spaces of tomorrow with objects and ideas that at the same time chronicle the contradictions, inconsistencies, flaws and frailties of the everyday. These visions of what's to come do not merely anticipate but actively shape technological futures through their effects on the collective imagination. This capacity for a fictional project to simultaneously reflect the current condition while suggesting the possibility of the next is what drives our engagement with these visions of the future. BRAVE NEW NOW slips suggestively between the real and the imagined to present filmic fragments of the near future city. In 2013 the studio followed the fibre optic cables and traversed the anonymous corridors of big box server farms to uncover the physical infrastructures of the internet. As the cooling fans spin and the LED's flicker the BRAVE NEW NOW speculated on our future relationships to data. The studio was developed in collaboration with Ivan Poupyrev of Design Research and motion studios by OLGV." Jurors: Andrew Blum, Andy Kinsella, Laura Kurgan, Guilherme Marcondes, Joanne McNeill, Sushma Subramanian, John Szot, Jenn Webb.