The Instruments Project is a research project that examines the philosophical and historical dimensions of architecture’s current technological predicament. Going beyond the usual view of architectural knowledge as hopelessly “instrumentalized,”  the project has engaged eight scholars, who have been collaborating over the past three years, to produce meditations around a set of gerunds—rendering, modeling, specifying, sensing, among others. The working group seeks to understand not only how these techniques underlie various design approaches today—particularly self-described “ecological” and “digital” ones—but what epistemological change they may signal as a whole, and what on the contrary they owe to continuities in technical thinking since the Enlightenment. The Project was launched and is co-directed by Zeynep Çelik Alexander and John J. May at the University of Toronto. This event, hosted and organized by Lucia Allais, brings its eight core contributors to the School of Architecture for a series of conversations with designers and historians of science and technology. 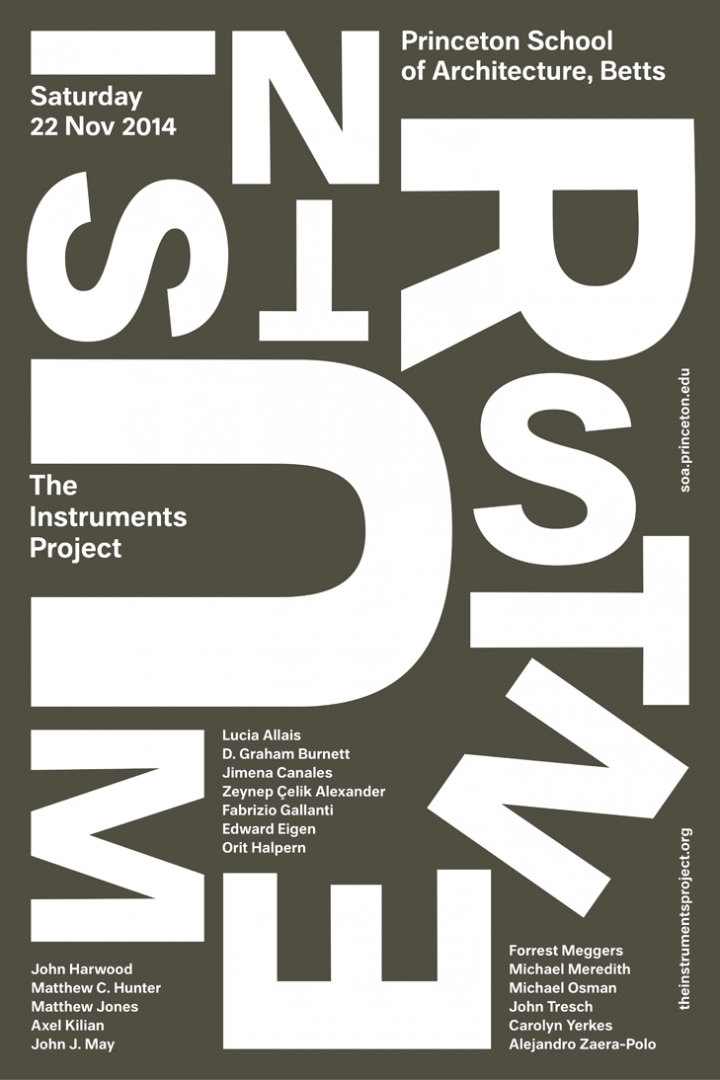 Caught between technophilia and technophobia, the fields of architecture, landscape, and urbanism are unable to articulate the material and epistemic conditions under which they labor today. Architectural techniques and tools remain consigned to the celebratory rhetoric of scientific discovery and technical innovation, whose principles now govern design practice and pedagogy simply by way of theoretical exhaustion. Speed, exactitude, acumen, efficacy, expertise, efficiency, and other trusted axioms of modern life can no longer conceal the political silence that resides at their core.

The Instruments Project is an excavation of that silence: its continuities and divisions, its hidden historical impulses, and the forms of reasoning and representation resident within it. Through sustained attention to instrumental processes that are—by design—both material and metaphysical, the project works towards establishing the technical dimension of architecture, landscape, and urbanism as a legitimate site for historical inquiry and philosophical reflection.

This event is supported by the Princeton School of Architecture, the SSHRC and the University of Toronto.

On new forms evidence in architecture

Field notes from the Instruments Project

On instruments in the studio

On instruments in the Field

On the history of the technical present