Extrastatecraft: the Power of Infrastructure Space

Repeatable formulas like spatial products and free zone world cities make most of the space in the world, and some of the world’s most radical changes are being written in the language of this almost infrastructural spatial matrix. Administered by mixtures of state and non-state players and driven by profound irrationalities, infrastructure space generates de facto, undeclared forms of polity that can outpace law. It is the secret weapon of some of the world’s most powerful players. Even at a moment of ubiquitous computing, the book considers space itself as an information system with the power and currency of software—a spatial operating system for shaping the city. An experimental narrative structure moves between exposing evidence of infrastructure space, learning to detect violence and productivity immanent in its organization and rehearsing ways to hack it with expanded techniques of form-making and surprising approaches to political activism. 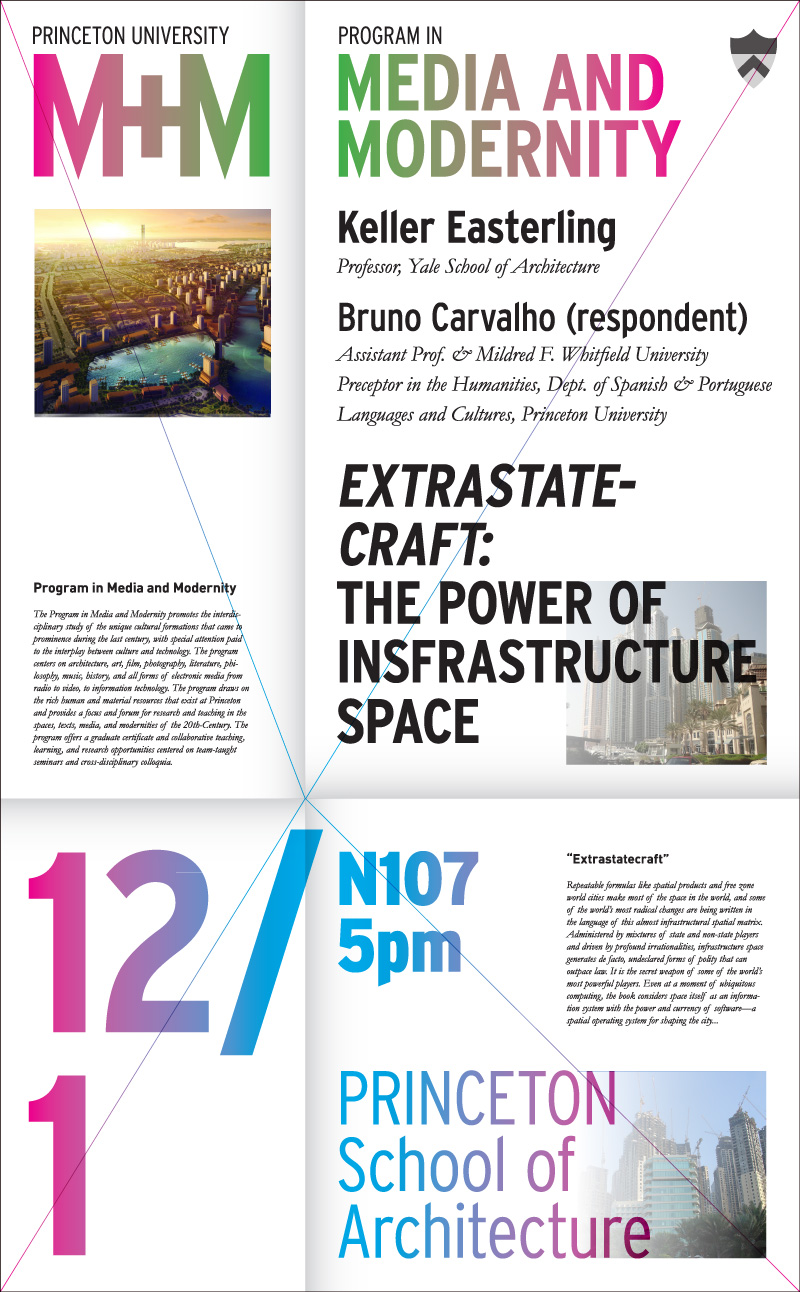 Keller Easterling is an architect, writer and professor at Yale. In addition to Extrastatecraft: The Power of Infrastructure Space (Verso, 2014), Easterling is the author of Subtraction (Sternberg, 2014), The Action is the Form (Strelka Press, 2012), Enduring Innocence: Global Architecture and its Political Masquerades (MIT, 2005) and Organization Space: Landscapes, Highways and Houses in America (MIT, 1999). Easterling’s essay “Floor” was recently included in the Elements exhibition of the 2014 Venice Biennale.

Bruno Carvalho is Assistant Prof. & Mildred F. Whitfield University Preceptor in the Humanities at the Department of Spanish & Portuguese Languages and Cultures of Princeton University. His research and teaching interests range from the early modern period to the present, and include literature, culture, and the built environment in Latin American and Iberian contexts, with a focus on Brazil. He has written on topics related to poetry, film, architecture, cartography, city planning, race and racism in publications like Spaces and Flows, Luso-Brazilian Review, Journal of Latin American Cultural Studies, Remate de Males, revista piauí, Daylight & Architecture, and others. His book Porous City: A Cultural History of Rio de Janeiro, published by Liverpool UP in 2013, was awarded the 2014 Roberto Reis Prize of the Brazilian Studies Association.