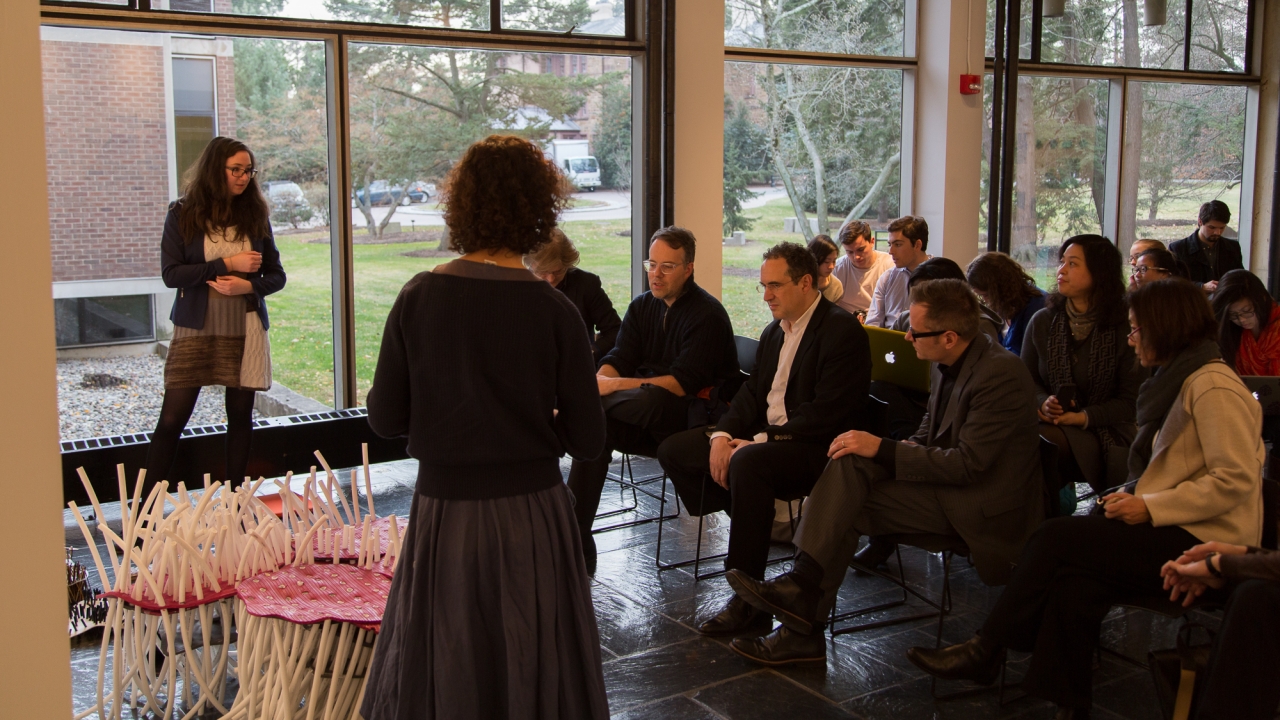 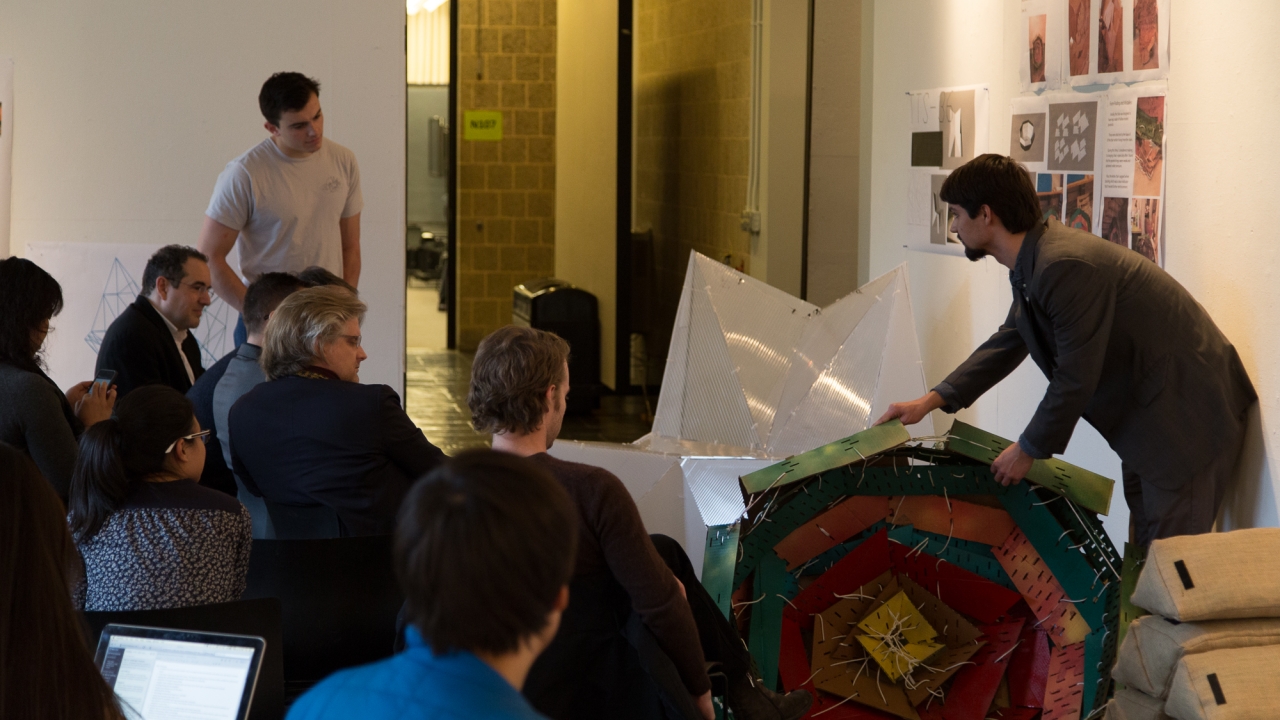 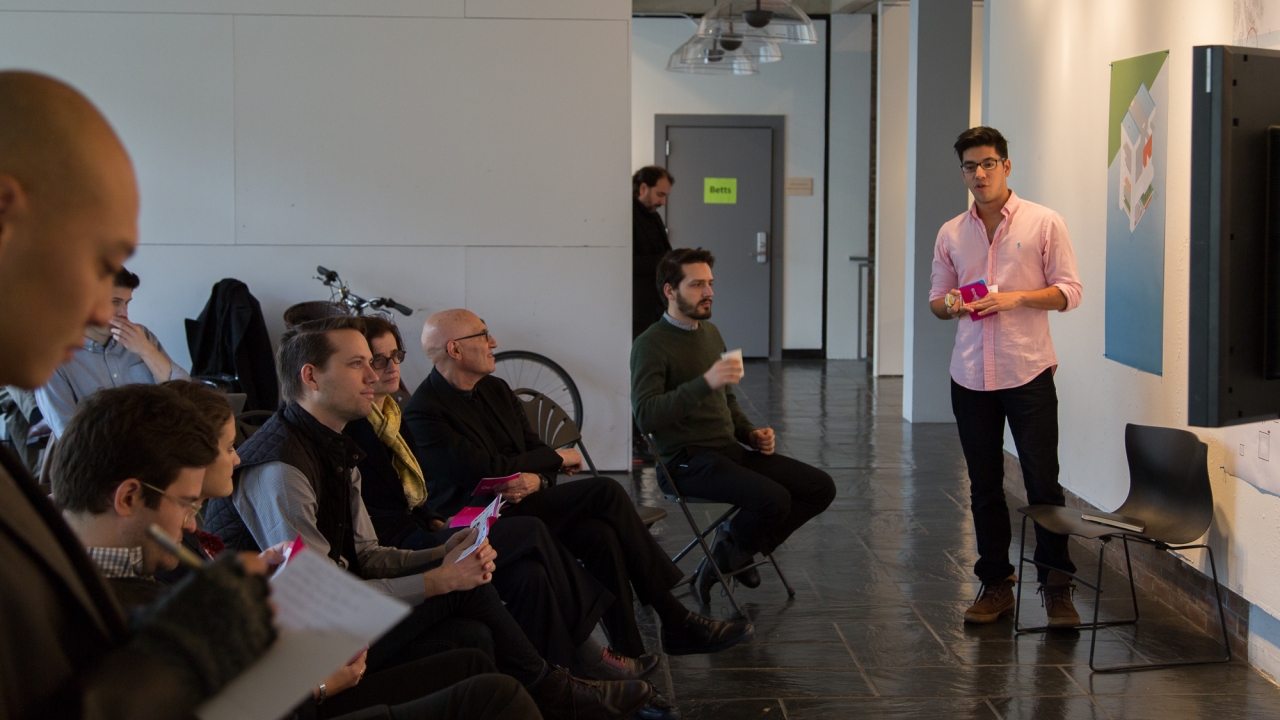 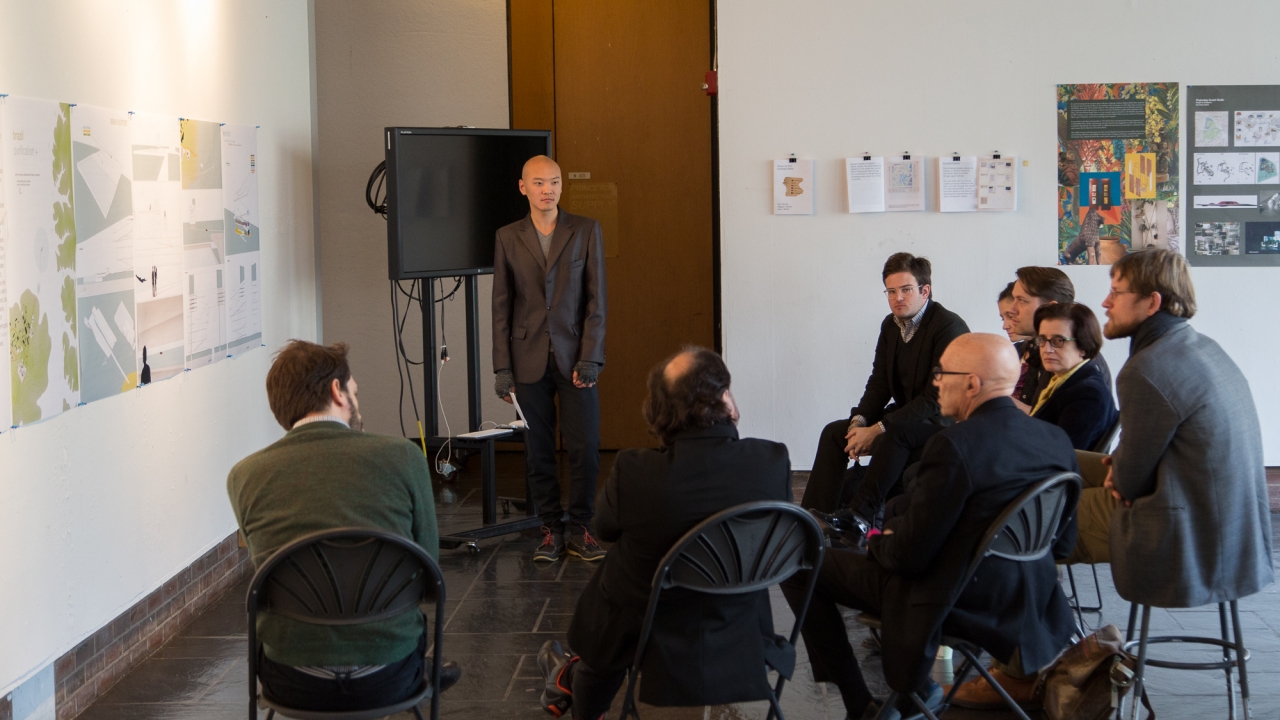 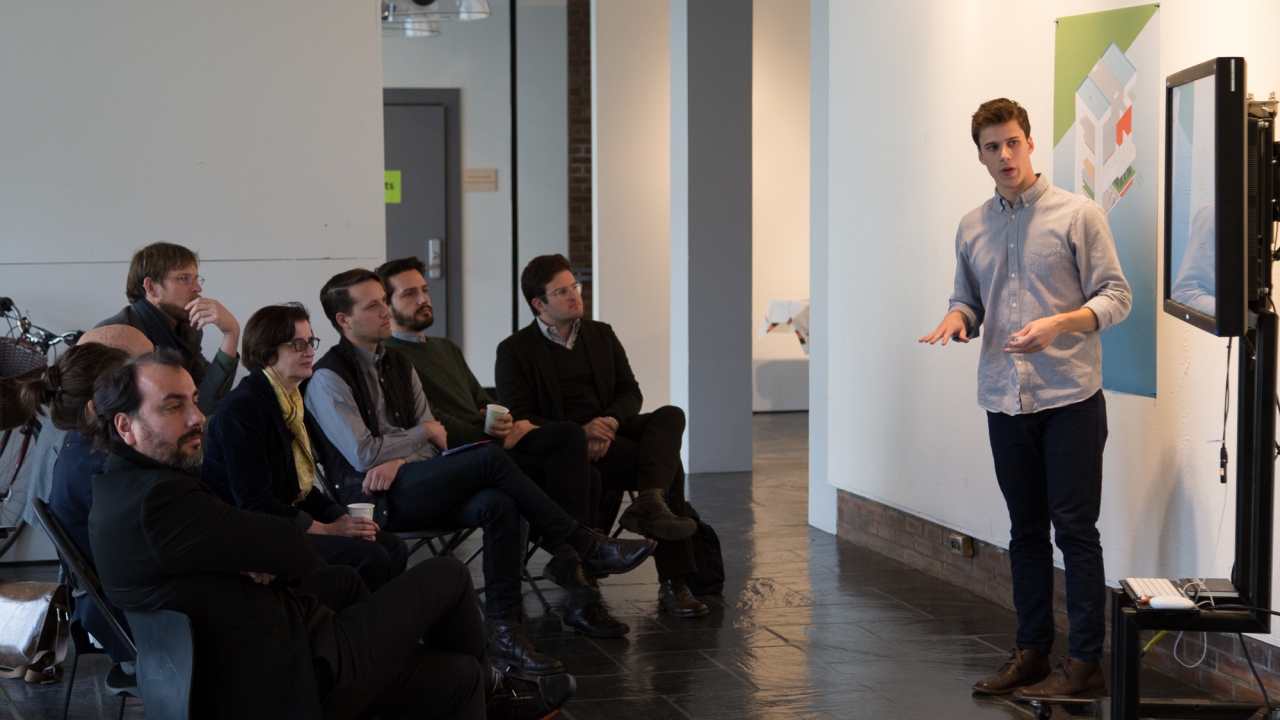 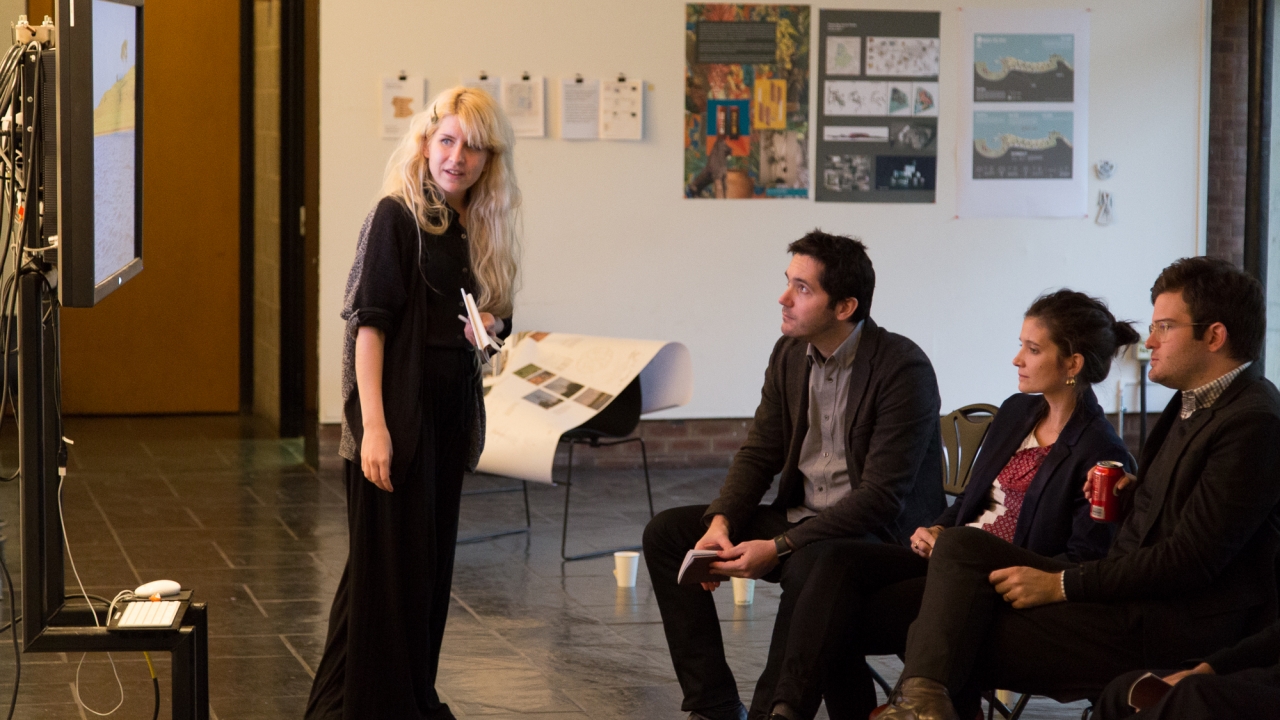 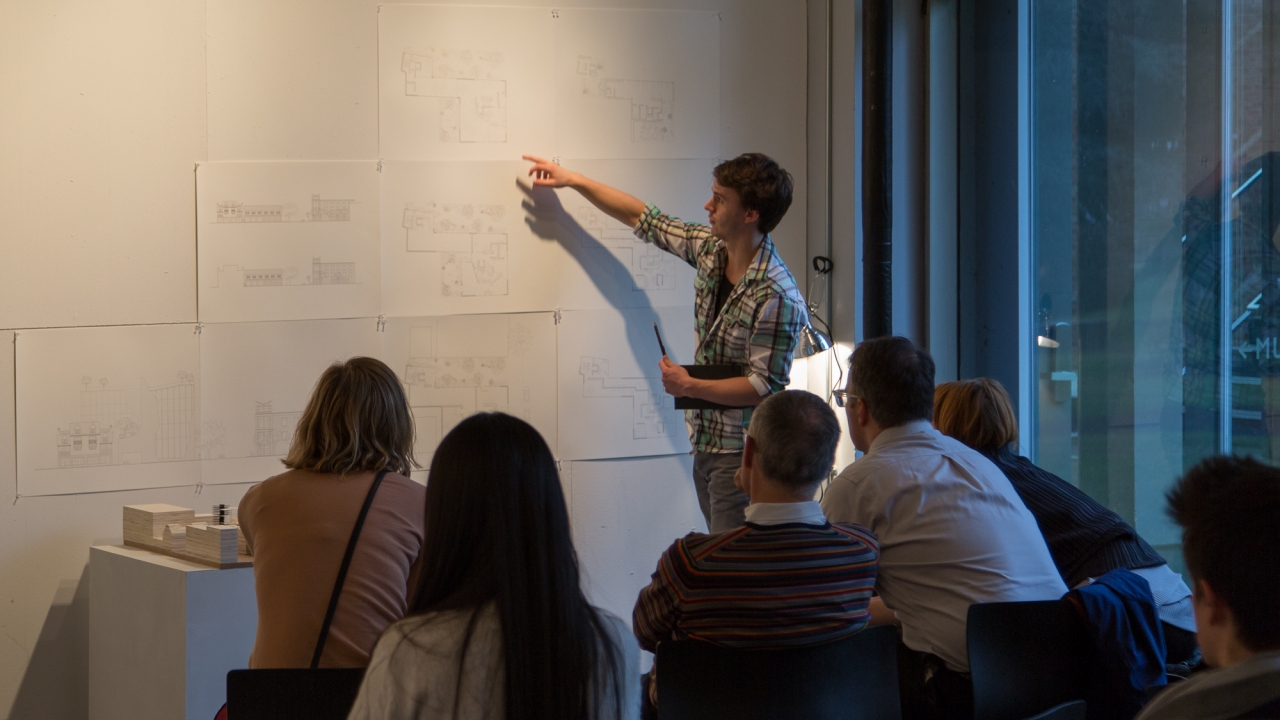 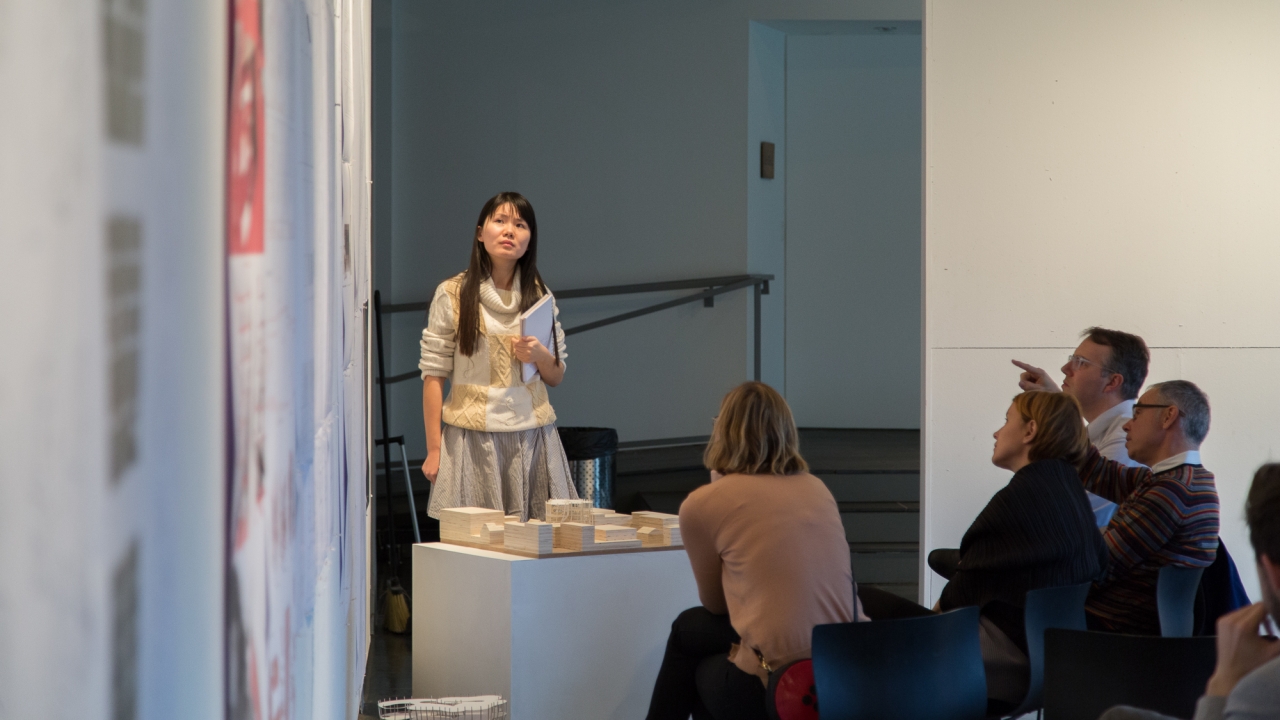 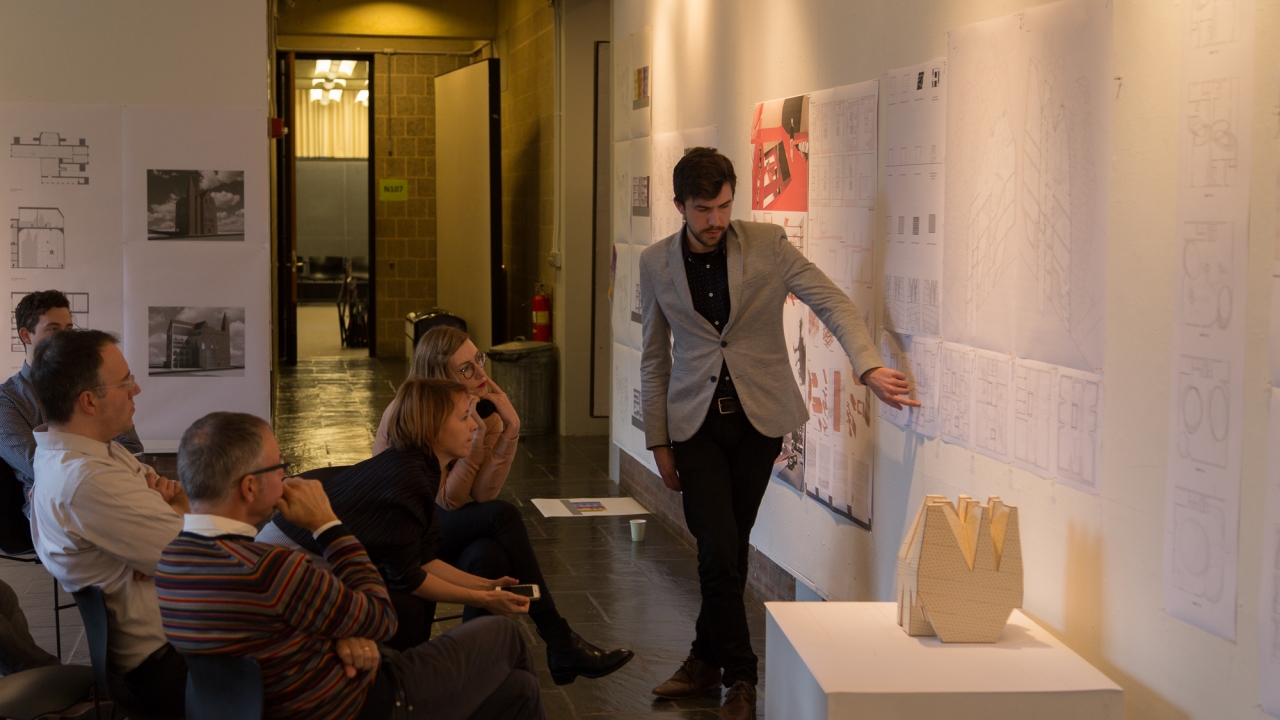 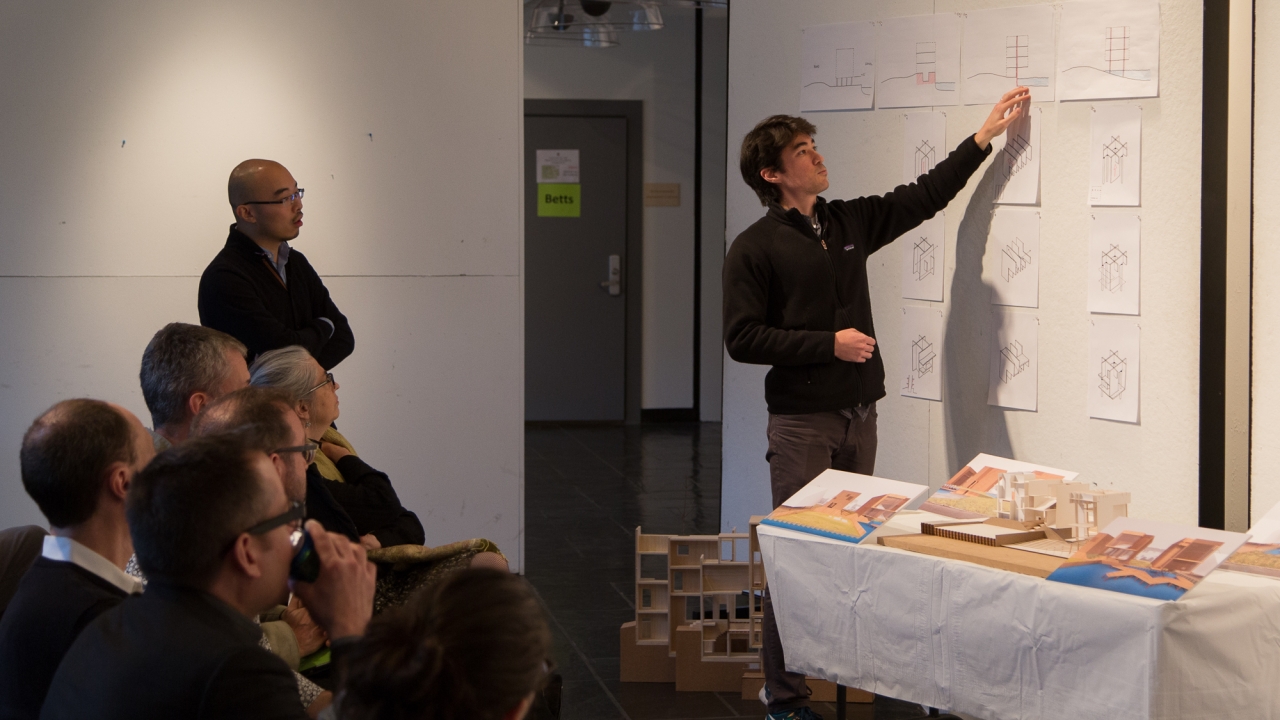 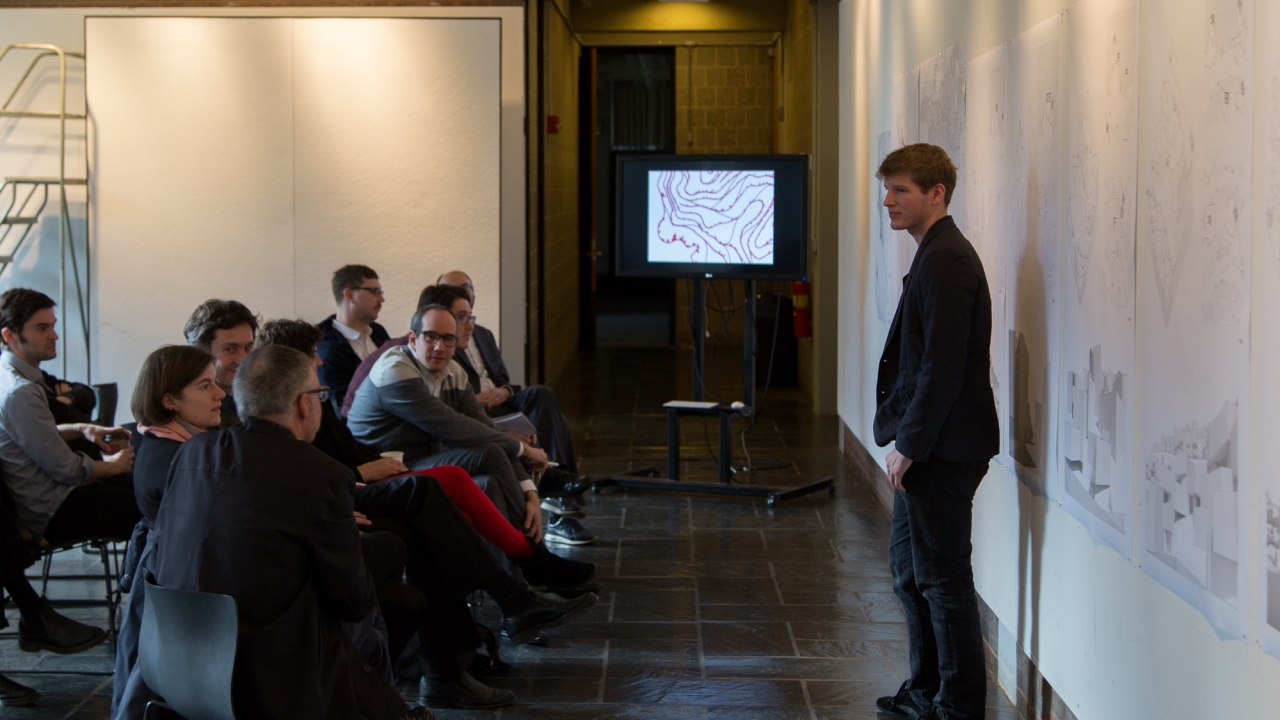 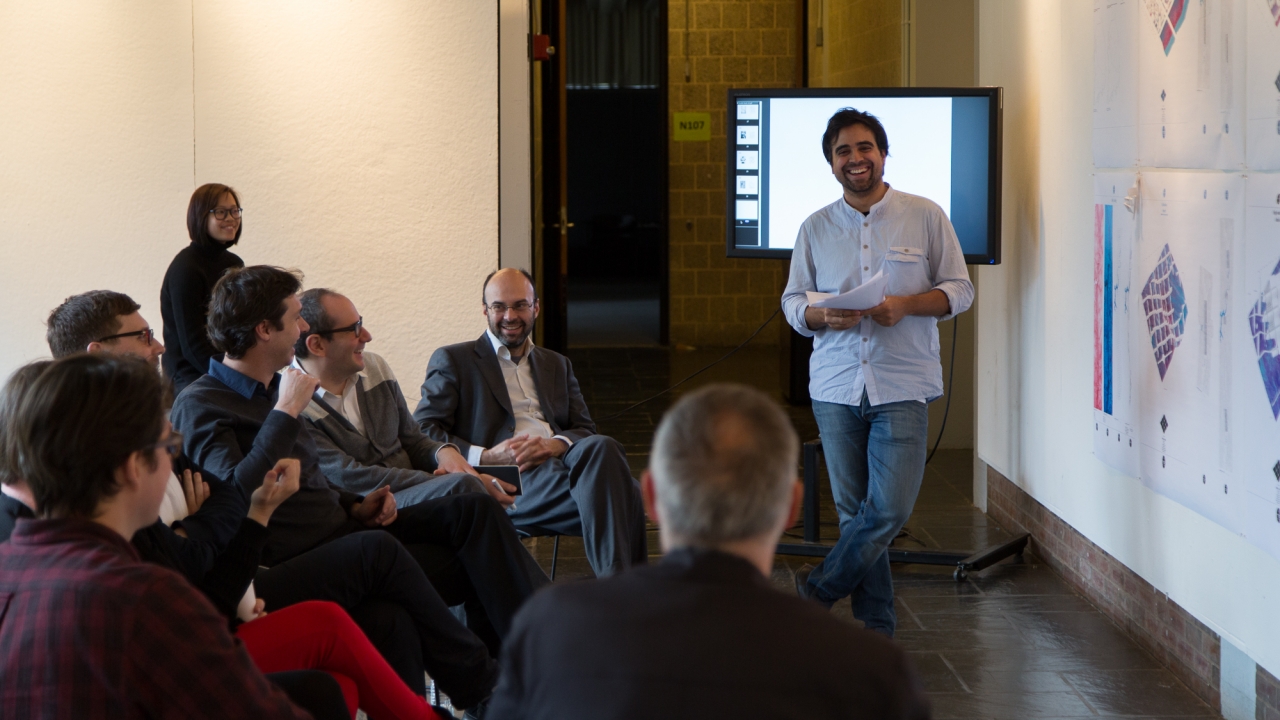 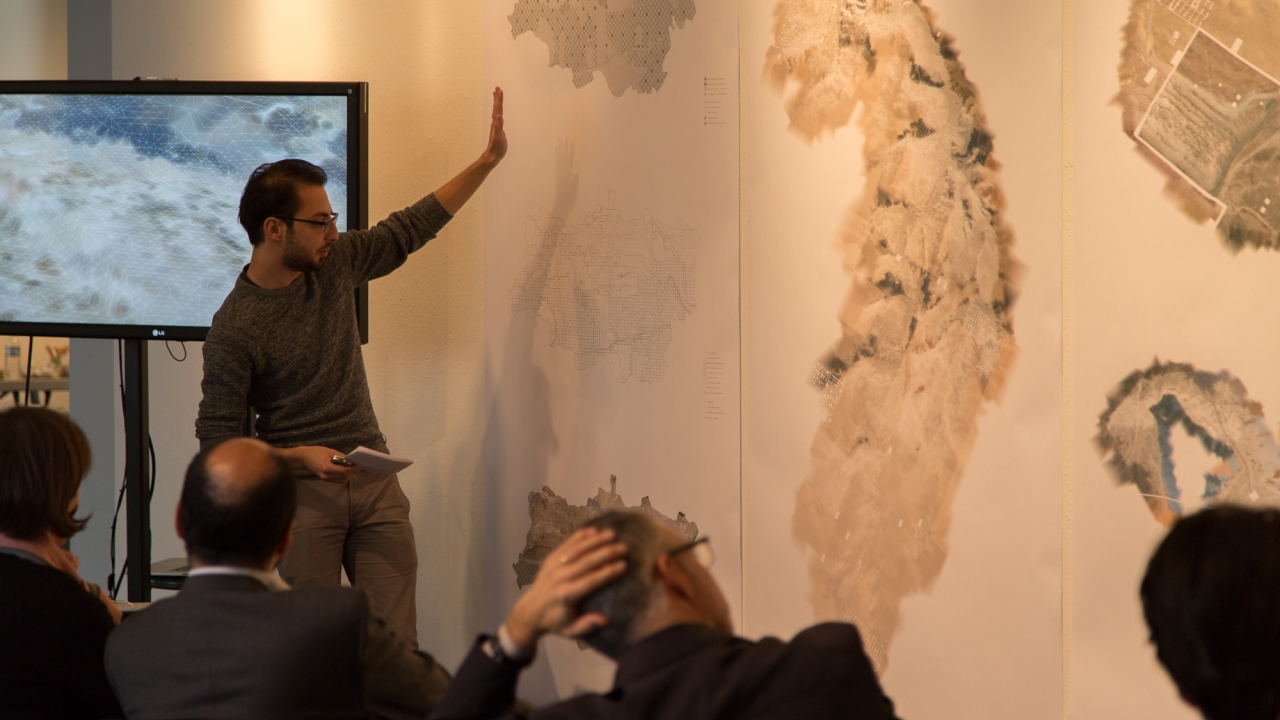 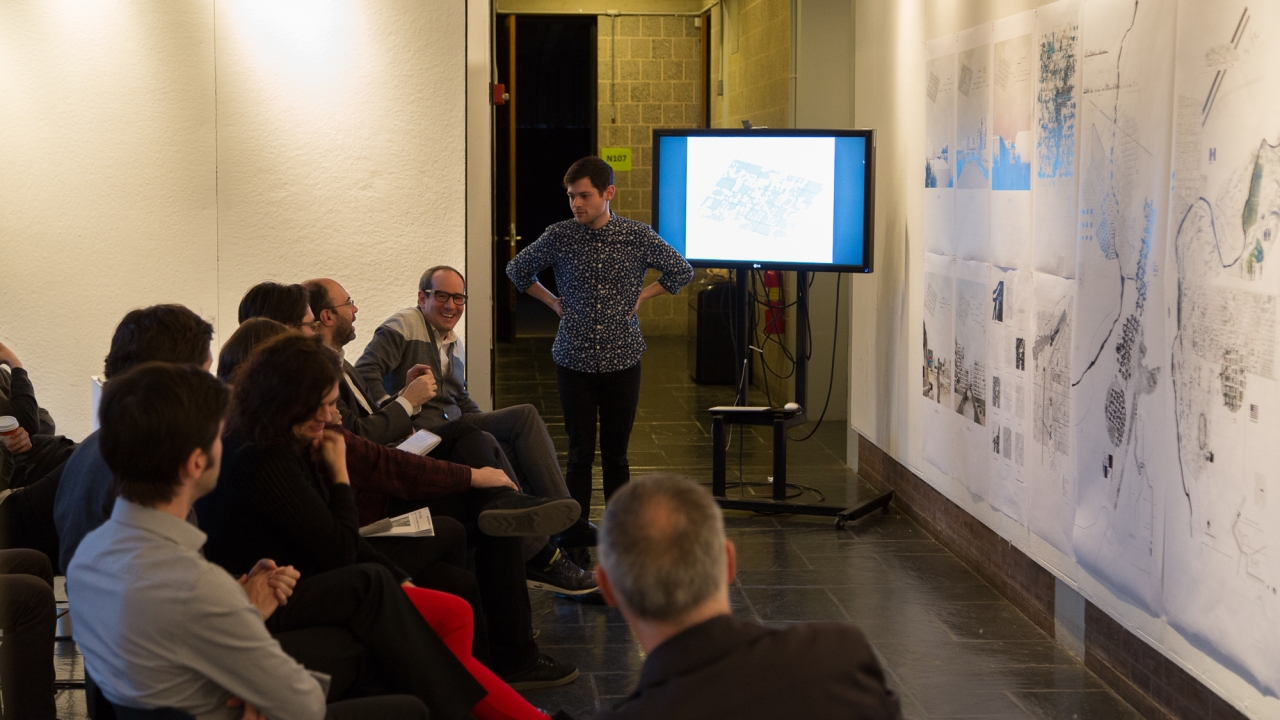 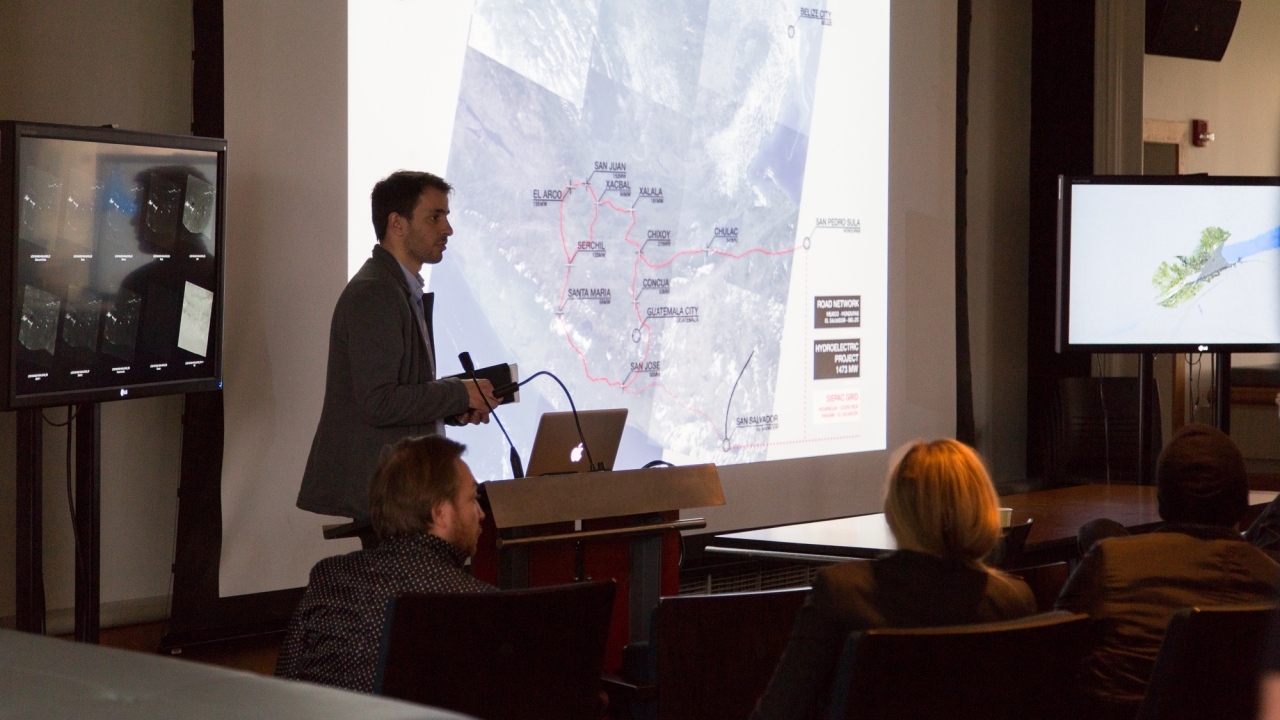 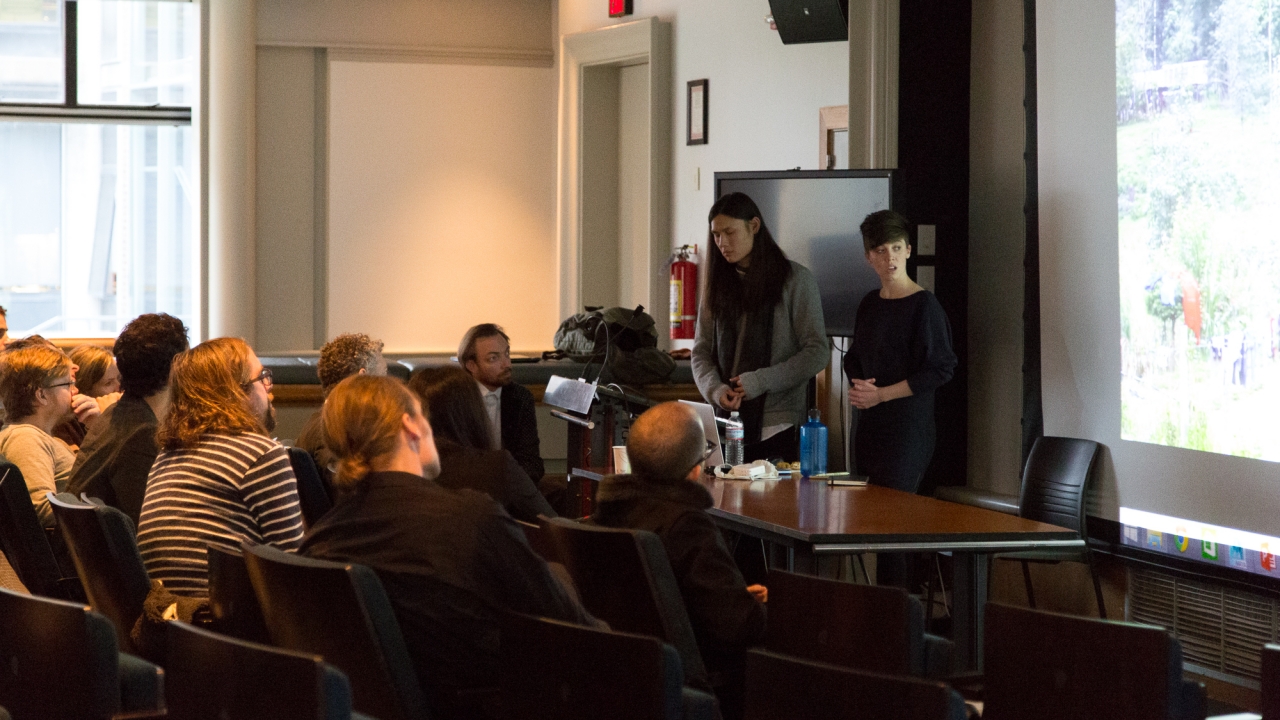 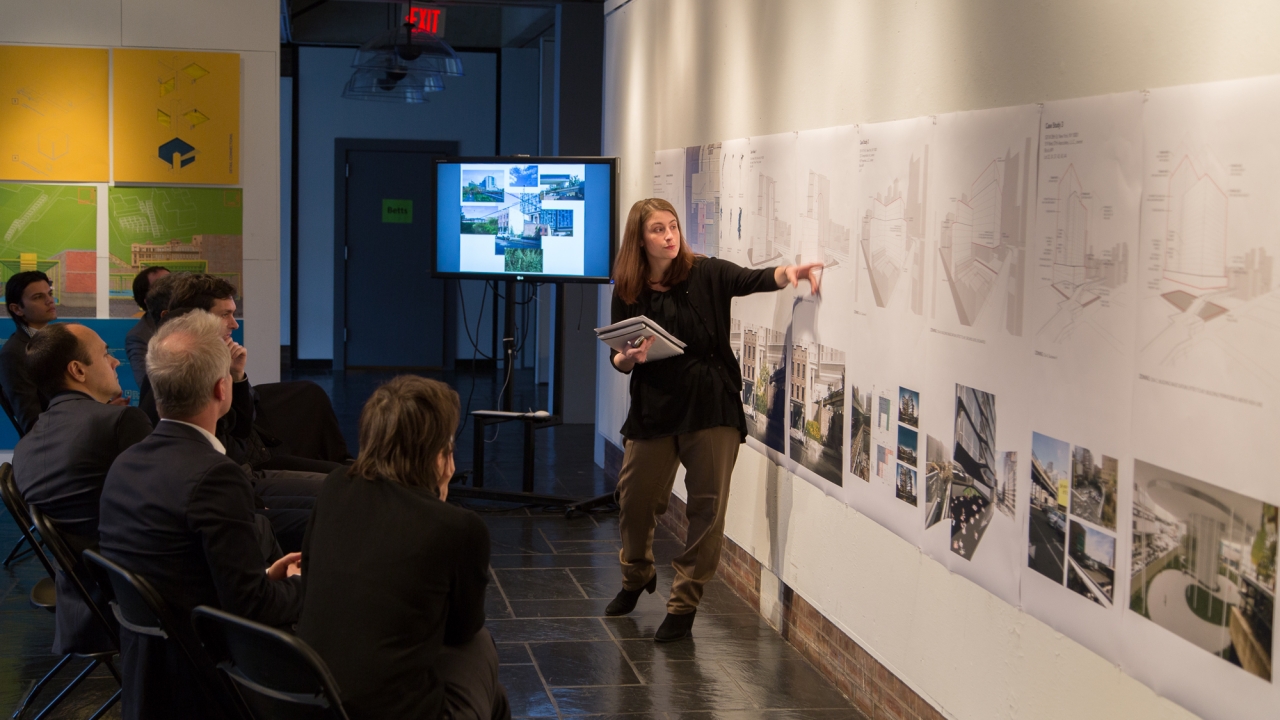 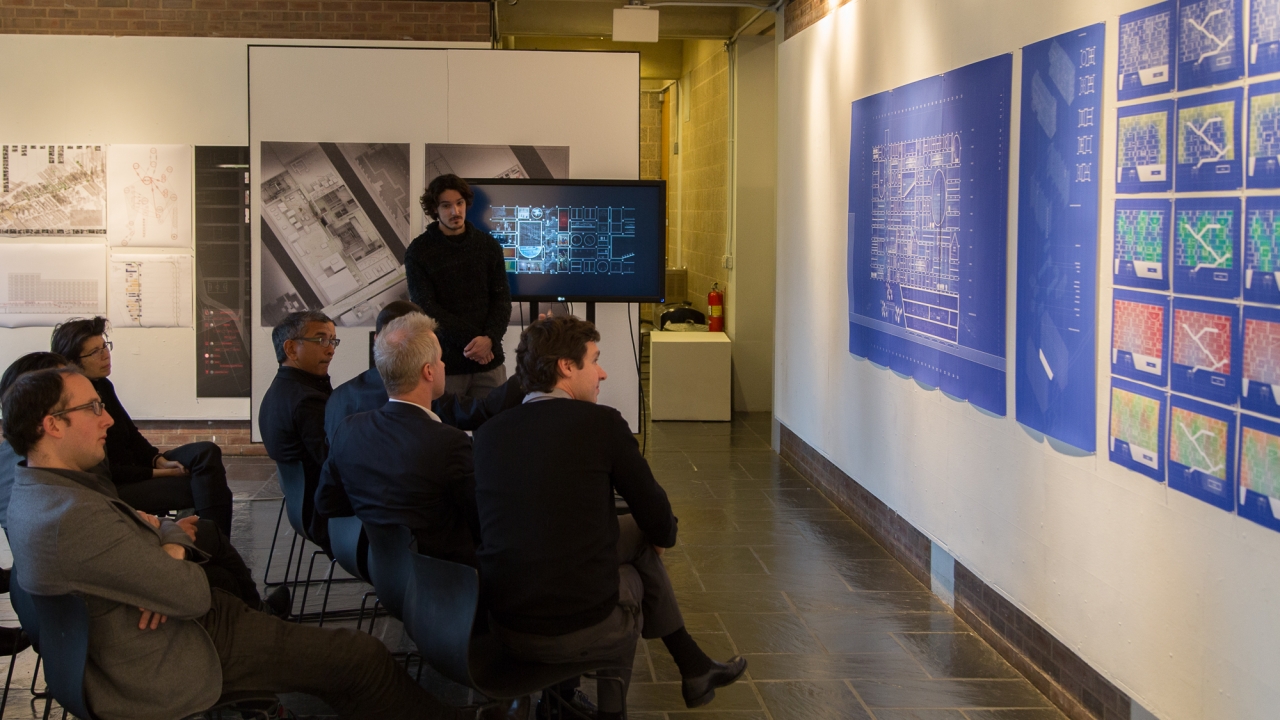 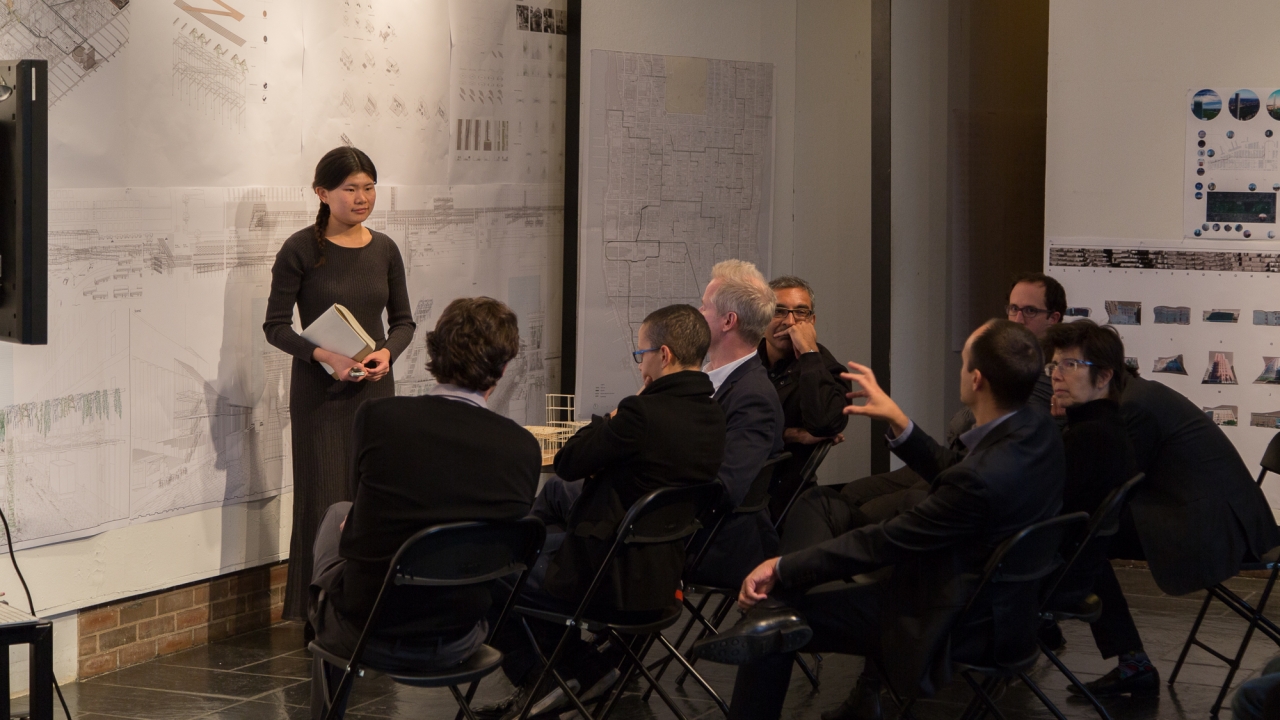 From December 8 through December 12, the Fall 2014 undergraduate and graduate Design Studios occupied the Architecture Building.

"Throughout the history of modern architecture, furniture has served as the most concise representation of an architect's design principles. While these principles could be applied to projects at any scale, the social, material, geometric, and aesthetic forces underlying an architect's disciplinary project here find their most poignant resolution.  Given the relatively small scale of the endeavor, it is the intention of the studio that each architect will produce a piece of furniture at full scale. This does not imply an uncritical return to a craft ethos (though craft as a cognitive and technical procedure is very necessary) rather it suggests a form of ‘management’ that would marry techniques and materials derived in the computational environment with material practices."

"The 2014 Senior Joint Studio has been developed in conjunction with the Faculty of Architecture, University of Sao Paulo. The site for the studio, one of the Eco ports of the Hidroanel, a major urban infrastructural project, a 170 km. water ring in Sao Paulo will be located at the Borore lake arm of the Billings reservoir, between Peninsula "Cantinho  do Ceu" and Peninsula Borore. The program for the first part of the studio will be the “reading” of the work of the Brazilian landscape designer Roberto Burle Marx within the context of five hundred years of Western and non-Western garden design and the program for the second part will the design of a water park as a new cultural and entertainment device for the Sao Paulo metropolitan region."

Medium is how we conceptualize and work through a project (“technical support” i.e. form, function, material, program, context, and so on). Convention is how we situate and evaluate the work within the discipline. Play is something else. History has proven these elements to be highly unstable, of course every generation tasked to rewrite them and each of these with their own specific outcome or emphasis in mind. While convention may offer some protection against the anxiety generated by change, medium continually produces new enthusiasms and frictions which exacerbate the improvisation of play.

This introductory course presents the discipline of architecture through a series of interrelated discrete exercises. These problems are not meant to represent the synthetic totality of the discipline, rather an overview of a few important aspects, points of architecture that help construct a self-conscious framework, allowing for the students to individually connect-the-dots, providing a foundation for further development.

" Approximately 45,000 houses in New Jersey are currently built on former wetlands. Built to maximize the real estate value of waterfront properties, that very proximity has proven toxic due to global warming and sea level rise, made acutely palpable by Hurricane Sandy. While much of the debate about the future of these wetland sites tends toward the binary extremes of retreat (buy back and demolish programs) or fortification (sea walls), the more tactical/local approach of lifting a house above base flood elevations is emerging as a more common approach. Single family houses across the region, previously rooted to their lawns have grown legs and new houses are being built atop platforms, with these platforms operating as a surrogate ground. Driven by sea level rise, lawns will likely be reclaimed by migrating salt marshes over the next 50 to 80 years. These transformations present a fascinating architectural problem. What happens to the basic elements of the suburban house--the front lawn, the driveway, the garage, the front door, the front elevation, patio, porch, roof, basement, windows--when the basic organizational relationship are radically reconfigured? Elevated houses now exist in New Jersey that give evidence to this problematic--houses built without front doors, former front doors marooned on upper floor decks, elevated thick driveways, back yard privacy replaced by panoramic exposure, extremely large upper level decks replacing the lawn, etc.. The studio will explore what new opportunistic architectural potentials can be exploited from the dislocation of the building from the ground, and the transformation of the ground into a type of wetland."

This studio will revisit—and hopefully reinvent—the tradition of imagining a city from scratch. The world’s population is projected to increase by 1.5 Billion in the next 15 years.  Already more than 50% of that population lives in urbanized areas and the percentage is projected to reach 75% in coming decades. In developing countries (where the bulk of the population growth is occurring), the existing urban infrastructure is simply incapable of supporting that level of growth.  Rather than accommodate that population growth in already stressed urban centers, a more viable strategy would be a series of Start-up Cities).

In order to develop new strategies, we will collectively analyze past examples, and produce designs valid in the present. We will review contemporary urban thought and proposals: New Urbanism, Landscape Urbanism, Infrastructural Urbanism. We will explore new conceptual frameworks opened up by complexity theory and ecological thinking. We will investigate the environmental implications of city design, and pay attention to the ecological impact of these new cities.  Finally, the iterative and serial nature of urban form is well-suited to computational design and we will make full use of new design methods.

An architectural catalyst is typically a work of signature architecture meant to stimulate economic growth and urban renewal in a city. Gehry’s Guggenheim Museum Bilbao is a critical benchmark of the potential of a single building to spur the revitalization of an urban area in decline.

Closer to home, the High Line’s transformation from an obsolete stretch of industrial infrastructure into a public park is a more modest case in point. Conceived initially as a local amenity that would boost neighborhood growth and attract 300,000 visitors annually, the High Line now attracts over five million visitors annually. Once a quiet probe in a forlorn corner of Manhattan, the High Line is now the organizing principle for a new wave of post-industrial commercial activity. The city’s initial investment of $150 million has stimulated over $5 billion in development in West Chelsea. The High Line has gone viral: cities across the globe have been rushing to turn their obsolete infrastructure into public space, aspiring to a revitalizing “High Line Effect” of their own.

Today, the High Line is a microcosm of a city in delicate balance between vacancy and gentrification. Vestiges of industry bordering the High Line linger in limbo while glass condos sprout sporadically like new shoots of grass—all poignant reminders that the High Line will ultimately fall victim to its own success and the homogenizing effects brought on by rapid urban growth. The shift in demography is obvious as transgender prostitutes, scrap metal dealers, butchers and teenage street gangs have given way to chauffeured art collectors, couture merchandisers, uniformed private school children and throngs of international tourists.

What is the measure of success for the urban catalyst? Can development happen too quickly? What is the responsibility of the architect in shaping the aftermath of positive urban change? Extending the chemical metaphor, if a catalyst speeds up a chemical reaction and a retardant slows one down, can there be a role for an architectural retardant?