M+M: Kaja Silverman with Eduardo Cadava, "THE MIRACLE OF ANALOGY, or, The History of Photography, Part 1"

THE MIRACLE OF ANALOGY, or, The History of Photography, Part 1

The Miracle of Analogy is the first of a two-volume reconceptualization of photography. It argues that photography originates in what is seen, rather than in the human eye or the camera lens, and that it is the world's primary way of revealing itself to us. Neither an index, representation, nor copy, as conventional studies would have it, the photographic image is an analogy. This principle obtains at every level of its being: a photograph analogizes its referent, the negative from which it is generated, every other print that is struck from that negative, and all of its digital "offspring."The present volume focuses on the nineteenth century and some of its contemporary progeny. It begins with the camera obscura, which morphed into chemical photography and lives on in digital form, and ends with Walter Benjamin. Key figures discussed along the way include Nicéphore Niépce, Louis Daguerre, William Fox-Talbot, Jeff Wall, Joan Fontcuberta, Abelardo Morell and John Dugdale. 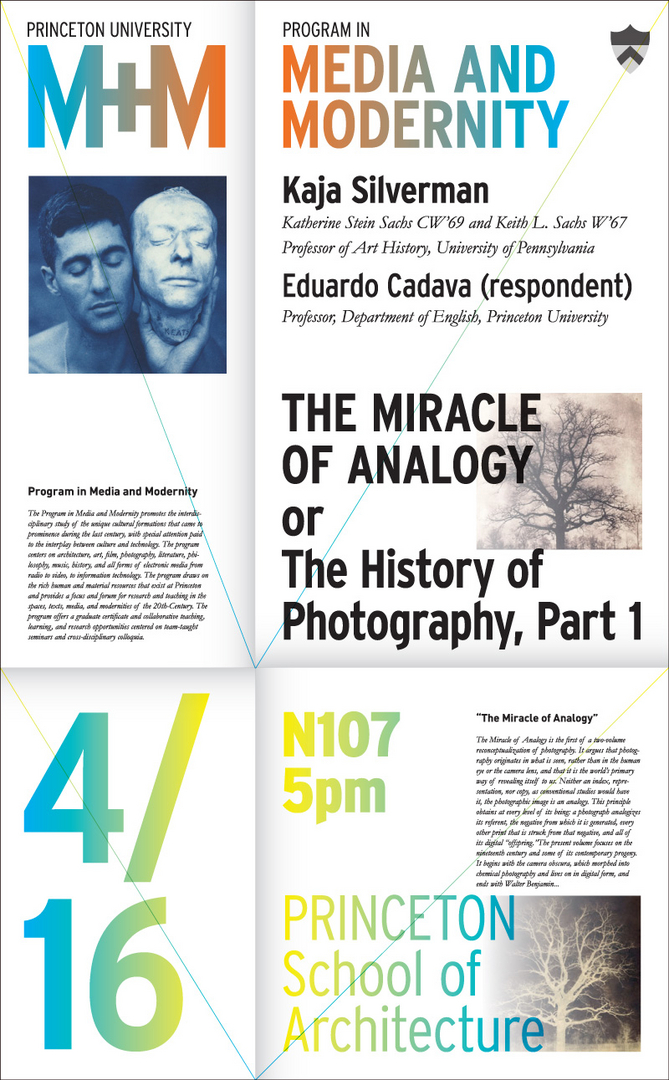 Kaja Silverman Kaja Silverman is the Keith L. and Katherine Sachs Professor of Contemporary Art, and the author of nine books: The Miracle of Analogy (2014); Flesh of My Flesh (2009); James Coleman (2002); World Spectators (2000); Speaking About Godard (with Harun Farocki, 1998); The Threshold of the Visible World (1996); Male Subjectivity at the Margins (1992); The Acoustic Mirror; The Female Voice in Psychoanalysis and Cinema (1988); and The Subject of Semiotics (1983).

Eduardo Cadava is the author of Words of Light: Theses on the Photography of History; Emerson and the Climates of History; and, with Fazal Sheikh, of Fazal Sheikh: Portraits. He also is co-editor of Who Comes After the Subject?; Cities Without Citizens; And Justice for All?: The Claims of Human Rights; and The Itinerant Languages of Photography. His book La imagen en ruinas will appear this spring in Chile and his translation of Nadar’s memoirs will appear this fall with MIT Press. His collection of essays, Paper Graveyards: Essays on Art and Photography, is forthcoming from Princeton University Press.