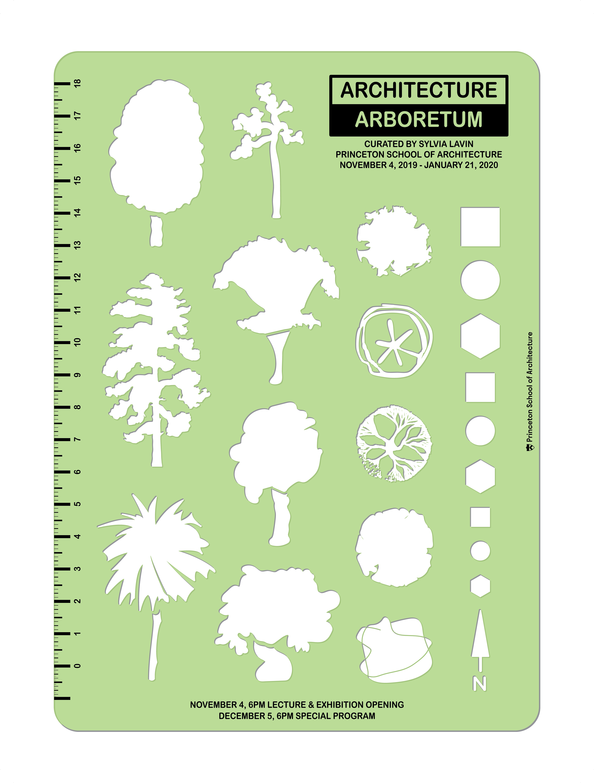 Photos of the exhibition

Modern architectural drawings contain a remarkable array of trees made with extraordinary precision and invention not explained by the need to record a site or the desire to animate a view. Although typically overlooked, trees in architectural drawings constitute an undiscovered arboretum containing evidence of important conceptual shifts in architectural thinking.  Architects have interpolated trees into drawings as linguistic signs, used them as objects of scientific observation, and eventually seized upon them as things to be designed. Architecture Arboretum, however, also offers an opportunity to consider the reverse: arboreal thinking about architecture and the active role trees have played in the production of architectural drawings.  The once unthinkable notion that trees are beings with interests of their own that process data about the world through distinct forms of representation has radicalized contemporary understandings of the environment. Architecture has more to learn from plant thinking than most disciplines, not only because architecture and trees share important features—the capacity to define space, produce climates, and shape the visual field—but also because trees perform architectural tasks in ways that care for the earth’s surface better than most buildings.

Sylvia Lavin is a Professor of History and Theory of Architecture at Princeton University. She received her Ph.D. from the Department of Art and Archaeology at Columbia University after having received fellowships from the Getty Center, the Kress Foundation, and the Social Science Research Council. Prior to her appointment at Princeton, Lavin was a Professor in the Department of Architecture and Urban Design at UCLA, where she was Chairperson from 1996 to 2006 and the Director of the Critical Studies M.A. and Ph.D. program from 2007 to 2017.

This exhibition is co-sponsored by the Humanities Council’s David A. Gardner ’69 Magic Project.