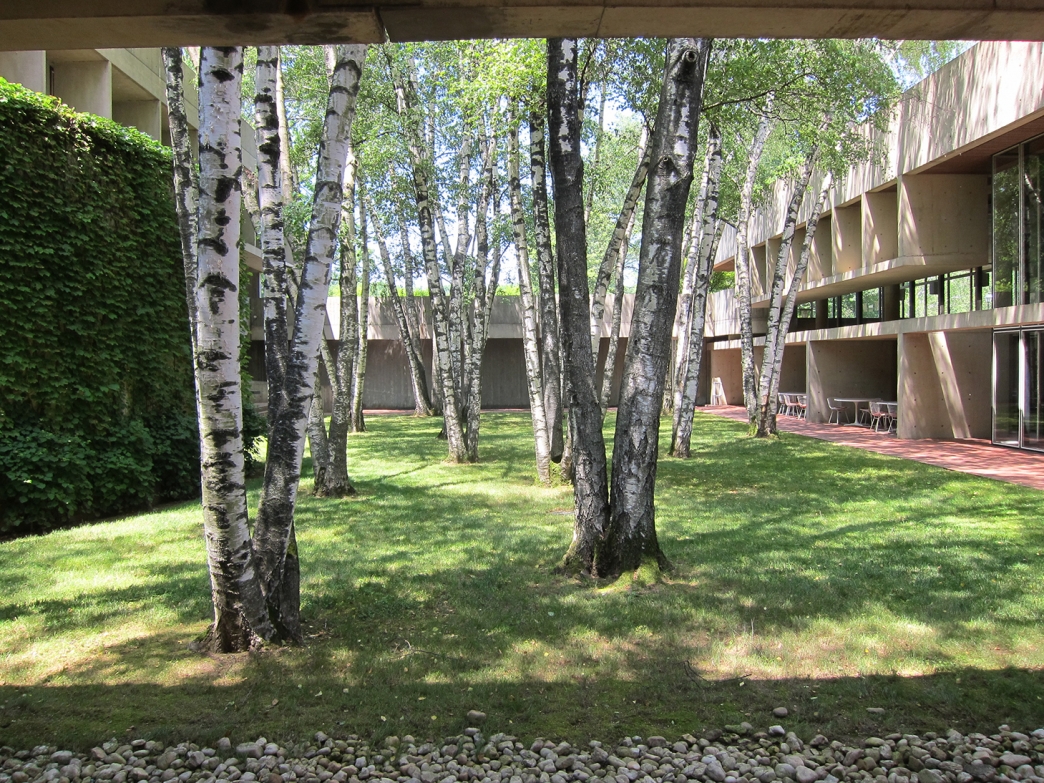 DOCOMOMO - A talk by Robert Geddes.

We moved to New Jersey.

That could be the first line of a crime novel, the headline of a real estate ad, or the last line of a TV sitcom. In this case, it is just a matter of fact:  “we” refers to Carl Kaysen, the newly appointed Director of the Institute for Advanced Study, and me, the newly appointed Dean of the School of Architecture. We both moved to Princeton in 1965-66. Carl moved from Cambridge, and I moved from Philadelphia.

On Saturday mornings, Carl and I walked and talked in the Institute woods. We especially enjoyed coming out of the forest onto the sunny path along the edge of the old farm. We talked about the history of ideas, social history, intellectual history, architectural history…and we explored connections between them. He was fascinated by “form”...both social form and physical spatial form.

According to historian Edward Tenner in the Atlantic Monthly, Carl was “One of the quietest yet most versatile of the major public intellectuals of the last half of twentieth century…” The article was titled “Carl Kaysen, A Legacy Worth Studying.”

We are sitting in Carlʼs legacy.

According to the Instituteʼs history book, “The new Dining Hall ….replaced the lunchroom in Fuld Hall, where the need to eat quickly so as to free oneʼs seat for a colleague gave little opportunity for a lingering chat.” …“A culture of insularity began to give way to one of collegiality, centered on a gathering place for a true community of scholars.” *

Where did the original concept of the Institute, as a “community of scholars,” come from?

In 1929, the Institute's benefactors, the Bamberger / Fuld family, sold their Newark department store to R. H. Macy just weeks before the market crash. They hoped to create a medical school in New Jersey, and sought the guidance of Abraham Flexner, who transformed medical education, research, and practice.

Flexner had broad social and intellectual imagination. For example, he  envisioned the medical  profession as a "social instrument...whose function is fast becoming social and preventive, rather than individual….” His goal for the profession was “community.”

Flexner connected social form and physical form. "To visualize the Institute tentatively, I should think of a circle, called the Institute for Advanced Study. Within this, as scholars and funds are available, create a series of schools or groups...a School of Mathematics, a School of History..."

For the College of New Jersey, now Princeton University,  the original “campus” was laid out by a scientist, Joseph Henry. Its first  building,  Nassau  Hall,  was  a  classical  pavilion,  with absolute clarity of place and purpose. But Princeton's later "collegiate gothic" reveled in medieval complexity. Its unsymmetrical composition of archways and courtyards, roofs and towers, was an Oxbridge paradise. In that context, Flexner pondered, what should be the form of the Institute for Advanced Study?

The Institute settled in Princeton, with offices scattered throughout the university and town. After almost a decade, the Institute built Fuld Hall, the first on its own campus. The design was chosen in an invited competition including the campus architects of Princeton, Harvard, and Dartmouth. In a letter to the Trustees, Lewis Mumford had recommended Frank Lloyd Wright.

Dartmouth's architect, Jens Larson, won the competitiion. But, culturally and environmentally, Thomas Jefferson won. The design concept of the Institute was of Jefferson's ideal: arcadia.

Flexner's initial concept had been a symmetrical circle, but he was also concerned about growth and form — both the social form and the physical form. Flexner, always a modernist, wrote that "if the Institute is unsymmetrical, it can more readily remain elastic."

The postwar Institute was led by decidedly modernist directors, the scientist Robert Oppenheimer and the economist Carl Kaysen.

During Kaysen's leadership as director, the new Dining Hall was built as a Commons for the Institute as a whole, and a fourth school was added to the three existing schools. For the School of Social Science, Kaysen recruited Clifford Geertz (Anthropology), and later, Albert Hirschman (Economics), and Michael Walzer (Politics). Kaysen's triumvirate was a brilliant achievement. The new school was in a new building, parallel to the new Dining Hall, creating a new outdoor room, the birch garden. They were all players in the modernist plot: "Make It New."

Carl Kaysen was delighted. He wrote that "ultimate standards in the intellectual world are aesthetic; terms such as originality, depth, and rigor are now used to characterize intellectual work, conveying judgements that are essentially aesthetic. Thus, it is appropriate to the Institute's purpose that it seek beauty as well as utility in the structures that house its activities, and embody it in visible form."

Kaysen sought to improve both the physical form and the social form of the Institute.

The original building, Fuld Hall, contained three social places, stacked on top of each other: a Common Room on the ground floor, a Library on the second floor, and a Cafeteria in the fourth floor attic. Architecturally, it was static and opaque.

About the new buildings — the Dining Hall and the West Building — Kaysen wrote in 1972:  "together with the space they enclose, they create an area of quiet harmony. The several hundred scholars who have talked and eaten in the dining hall; met, talked and listened in the seminar and lecture rooms; and worked in the offices, have all benefited from the sense of order and form which they provide....Further, the site, the roof lines and the landscaping of the new buildings connect them harmoniously with the old. Thus we can enjoy what is new without feeling a sense of conflict between it and what has already existed."

MAKE IT NEW, MAKE IT FIT.

Make it NEW is the essence of MODERN.

Make it FIT is the essence of COMMUNITY.

Talk presented at The Institute for Advanced Study, April 5, 2014