Faculty Publication: Not Quite Architecture: Writing around Alison and Peter Smithson 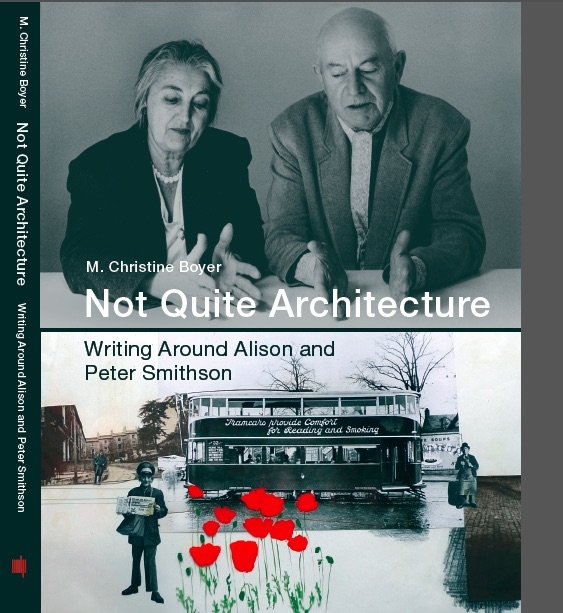 Not Quite Architecture: Writing around Alison and Peter Smithson, a new book by M. Christine Boyer

Overview
The English architects Alison Smithson (1928–1993) and Peter Smithson (1923–2003) were ringleaders of the New Brutalism, active in CIAM and Team 10, and influential in English Pop Art. The Smithsons, who met as architecture students, built only a few buildings but wrote prolifically throughout their career, leaving a body of writings that consider issues in architecture and urbanism and also take up subjects that are “not quite architecture” (the name of a series of articles written by Alison Smithson for the Architects’ Journal)—including fashion design, graphic communication, and children’s tales. In this book, M. Christine Boyer explores the Smithsons’ writings—books, articles, lectures, unpublished manuscripts, and private papers. She focuses on unpublished material, reading the letter, the scribbled note, the undelivered lecture, the scrapbook, the “magic box,” as words in the language of modern architectural history—especially that of postwar England, where the Smithsons and other architects were at the center of the richest possible range of cultural encounters. Boyer is “writing around” the Smithsons’ work by considering the cultural contexts in which they formed and wrote about their ideas.

Boyer explains that the Smithsons were intensely concerned with the responsibility of the architect to ensure the quality of place, to build with lyrical appropriateness. They reached back to the country landscapes of their childhood and, Boyer argues, mixed their brand of New Brutalism with the English Picturesque. The Smithsons saw architects as both inheritors and passers-on. Their writings offer juxtapositions and connections, resembling an association of interactive loops, ideas waiting to be transmuted into built form.

Endorsements
“Christine Boyer’s book Not Quite Architecture is a delightful journey through the last half century of architectural and urban design theory, focusing on the seminal contributions of Alison and Peter Smithson. They were pivotal figures, helping to organize Team 10 and its successors and chronicling its attitudes, promoting the New Brutalism through their writing and practice, dabbling in fashion and graphic communications, debating the virtues of collective design, and serving as provocateurs as urban and architectural theory has ascended in importance. Delightfully illustrated, the book captures an era that elevated design to the forefront of urbanism.”—Gary Hack, Dean Emeritus, University of Pennsylvania School of Design; coauthor of Site Planning

“Christine Boyer’s Not Quite Architecture offers a beautifully illustrated window into the complex world of English architectural discourse from the 1950s to the 1980s. Centered on the writings of Team 10 founding members Alison and Peter Smithson, it informs our historical understanding of the artistic and literary contexts of their immensely influential work.”—Eric Mumford, Rebecca and John Voyles Professor of Architecture, Sam Fox School of Design & Visual Arts, Washington University in St. Louis

“Boyer’s careful and creative interpretations of notes, scrapbooks, and texts found in the Smithsons’ archives is not only the most thorough, wide-ranging, and coherent account of those architects’ preoccupations and persistent but evolving interests: her original reconstructions of post-World War II discourses and their ruptures reinvigorate our understanding of mid-century modernism in Britain.”—Mark Linder, Professor, School of Architecture, Syracuse University

“Producing over 70 architectural projects and diagrammatic urban hypotheses in the space of 50 years, not to mention an equal number of sometimes overlapping texts, essays, manifestos, sundry artworks, landscapes, and even a novel, the Smithsons led a life of intense creativity. They were equally involved with the mores of their time, whether these were expressed in terms of automobiles, houses, furniture, fashion, or the changing format of their own domestic environment. They were as essential to swinging London as any of the other cultural heroes of that epoch, such as John Osborne, Mary Quant, and the Beatles. Christine Boyer gives us a vivid and nuanced portrait of the lives and works of this redoubtable architectural couple.”—Kenneth Frampton, Ware Professor of Architecture at the Graduate School of Architecture, Planning and Preservation, Columbia University