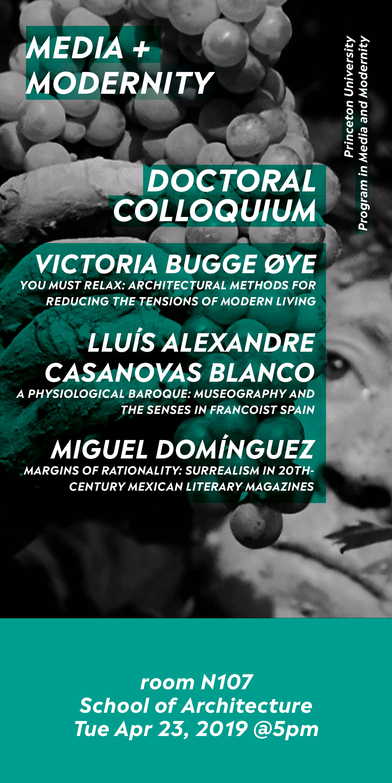 Victoria Bugge Øye, You Must Relax

Air pollution, urbanization trauma, overstimulation,psychosomatic diseases. These were the terms used by Viennese architecture collective Coop Himmelblau to describe the ailments threatening the contemporary city dweller in 1969. In collaboration with the newly founded Institute of Environmental Health in Vienna, Coop Himmelblau designed a series of objects using biofeedback to help reintegrate and heal an individual that had, ostensibly, been traumatized by modernity. Informed by German and Austrian anti-urban critiques and alternative self-care cultures in the USA, Coop Himmelblau arrived at a set of architectural prototypes designed not only to help the user relax, but to reconnect with their own instinctual and pre-modern “inner self.”

During the 1940s and early 1950s, Spanish art historians sympathizing with the new Francoist dictatorship attempted to trace a historical continuity of national identity by reframing the Spanish Baroque as a national style. While recasting perception as an autonomous, atemporal process, the historicity of the senses became the subject of contentious debates explored in the fields of art history, medical physiology, and psychological aesthetics.

The presentation assesses the reception and discussion of surrealism, the French avant-garde movement conventionally associated with the liberation of the unconscious, in three different literary magazines published in Mexico throughout the 20th-century. Tracing a process of both critical and creative approach to the movement since its inception in the mid-1920s, the paper will analyze different publications where surrealism is mobilized as an interrogation of national identity and rationalizing policies of the State.