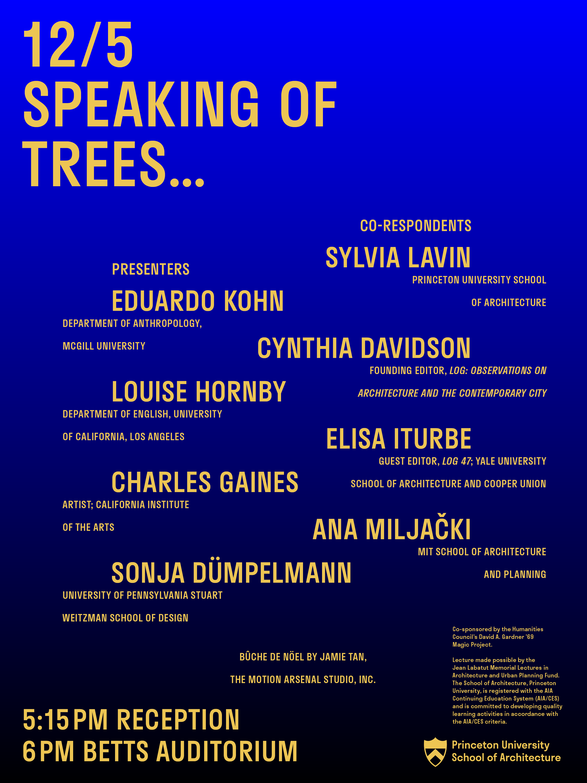 In conjunction with Princeton University School of Architecture’s Architecture Arboretum exhibition curated by Sylvia Lavin and designed by Erin Besler, Speaking of Trees… brings together individuals who are working with trees in widely divergent ways to discuss the challenges that ‘plant thinking’ offers to or imposes on contemporary, historical, and theoretical work.

Join us for a reception at 5:15pm for a Bûche de Nöel cake by artist Jamie Tan (The Motion Arsenal Studio, Inc).

Sonja Dümpelmann is a landscape historian and joined the faculty at the University of Pennsylvania Weitzman School of Design in July 2019. Her work focuses on nineteenth and twentieth-century urban landscape history in the Western world. She earned her doctorate at the University of the Arts Berlin and holds a master’s degree in landscape architecture from the University of Hannover. Dümpelmann is the author and (co-)editor of numerous books, most recently Seeing Trees: A History of Street Trees in New York City and Berlin (Yale Univ. Press, 2019). She lectures internationally and has served as President of the Landscape History Chapter of the Society of Architectural Historians and serves as Senior Fellow in Garden and Landscape Studies at the Dumbarton Oaks Research Library and Collection, Washington DC. Before joining UPenn sheheld associate and assistant professorships at Harvard University, the University of Maryland, and Auburn University.

Cynthia Davidson is an architecture editor and critic based in New York City. She is the founding editor of Log: Observations on Architecture and the Contemporary City, a tri-annual journal begun in 2003, and editor of the Writing Architecture Series books published by MIT Press.

Kurt Forster is Visiting Faculty at Princeton SoA and Visiting Professor Emeritus at Yale SoA. He has taught at Stanford University, Massachusetts Institute of Technology, ETH Zurich, and Bauhaus University at Weimar and founded and directed research institutes at the Getty Research Center in Los Angeles and the Canadian Centre for Architecture in Montreal. He has organized major exhibitions on Schinkel in Chicago, Carlo Scarpa in Vicenza, Italy, Herzog & de Meuron in Montreal, and for the 2004 Venice Biennale. Forster has published widely on the history of art and architecture. He is a member of the Research Council of the Palladio Center in Vicenza, Italy; the Bauhaus Foundation, Dessau, Germany; and the Accademia di San Lucca in Rome. Forster attended the universities of Berlin, Munich, and Florence and received a Ph.D. from the University of Zurich.

Charles Gaines Highly regarded as a leading practitioner of conceptualism and an influential educator at CalArts, Los Angeles-based artist Charles Gaines (American, b. 1944) is celebrated for his works on paper and acrylic glass, photographs, drawings, musical compositions, and installations that investigate how rule-based procedures influence representation and construct meaning. Gaines’ work is collected internationally, including at the MoMA, Whitney Museum of American Art, the Studio Museum in Harlem, and the Los Angeles County Museum of Art. His compositions created by translating revolutionary texts into musical notation have been widely performed, notably at the 2017 Melbourne Festival, at the Brooklyn Museum in 2016, and the 56th Biennale di Venezia, Venice. In 1977, Gaines received a grant from the National Endowment for the Arts, in 2007 a United States Artists Fellowship Award, in 2013 the Guggenheim Memorial Foundation Fellowship, in 2015 the CAA Artist Award, and the REDCAT award in 2018. Gaines was the 2019 recipient of the Edward MacDowell Medal. He is represented by Hauser & Wirth.

Louise Hornby is Associate Professor of English at UCLA, where she teaches on modernism and visual culture. Her first book, Still Modernism (Oxford, 2017), traces the photographic signature of stillness in novels and films of the early twentieth century, revealing how photographic stillness emerges in modernity’s accelerative culture as a counterpoint to motion and to film. She has published on modernism, photography, film, and installation art, and is currently working on a series of articles about weather and representation.

Elisa Iturbe is a critic at the Yale School of Architecture and Cooper Union. She currently works at Outside Development, a consulting and design practice, and previously worked at Eisenman Architects. She recently co-edited Log 47, “Overcoming Carbon Form” (2019).

Eduardo Kohn studies the intimate relationships that the indigenous peoples of Ecuador’s Upper Amazon have with one of Earth’s most complex ecosystems. Focusing on how they understand and communicate with rainforest beings has led him to the audacious conclusion that complex living systems manifest “mind” in a variety of ways. From this he develops an empirically robust framework to understand our broader relationship to such mind-like phenomena with the goal of rethinking how to live in the face of unprecedented anthropogenic climate change. His book How Forests Think won the 2014 Gregory Bateson Award for best book in Anthropology.  It is translated in nine languages and has inspired the planetary ecological imaginary in a surprisingly diverse number of ways ranging from an eponymous symphony premiering at Lincoln Center, to museum exhibits in Geneva and Montreal. He teaches Anthropology at McGill University in Montreal.

Sylvia Lavin is Professor, History and Theory of Architecture and Co-Director of the Media and Modernity Program at Princeton University’s School of Architecture. Prior to her appointment at Princeton, Lavin was a Professor in the Department of Architecture and Urban Design at UCLA, where she was Chairperson from 1996 to 2006 and the Director of the Critical Studies M.A. and Ph.D. program from 2007 to 2017. She is also a curator: a recent exhibition, Everything Loose Will Land: Art and Architecture in Los Angeles in the 1970s, was a principal component of the Pacific Standard Time series supported by the Getty Foundation and traveled from Los Angeles to New Haven and to Chicago. Exhibition Models, a show she curated for the Princeton University School of Architecture, opened in September 2018. The exhibition presented 18 models collected by Heinrich Klotz, historian of Brunelleschi and chronicler of postmodernism, as he formed the German Architecture Museum (DAM). Her installation, Super Models, was shown at the 2018 Chicago Architecture Biennial and she is currently working on Architecture Itself and Other Postmodernists Myths, an exhibition that will open at the Canadian Center for Architecture in the Fall of 2018.

Ana Miljački is a critic, curator and Associate Professor of Architecture at Massachusetts Institute of Technology, where she teaches history, theory and design. She has previously taught studios and seminars at Columbia University, City College in New York and Harvard University Graduate School of Design. She holds a Ph.D. (2007) in history and theory of architecture from Harvard University, an M.Arch. from Rice University and a B.A. from Bennington College. Her research interests range from the role of architecture and architects in the Cold War era Eastern Europe, through the theories of postmodernism in late socialism to politics of contemporary architectural production. Miljački was part of the three member curatorial team, with Eva Frank i Gilabert and Ashley Schafer, of the US Pavilion at the 2014 Venice Architecture Biennale, where their Biennale project, titled OfficeUS, critically examined the last century of US architectural offices; their professionalization and their concomitant global contribution.

Photos of this and other Fall 2019 events can be found on the Princeton SoA Flickr.

The recording will be available on Vimeo following the event.