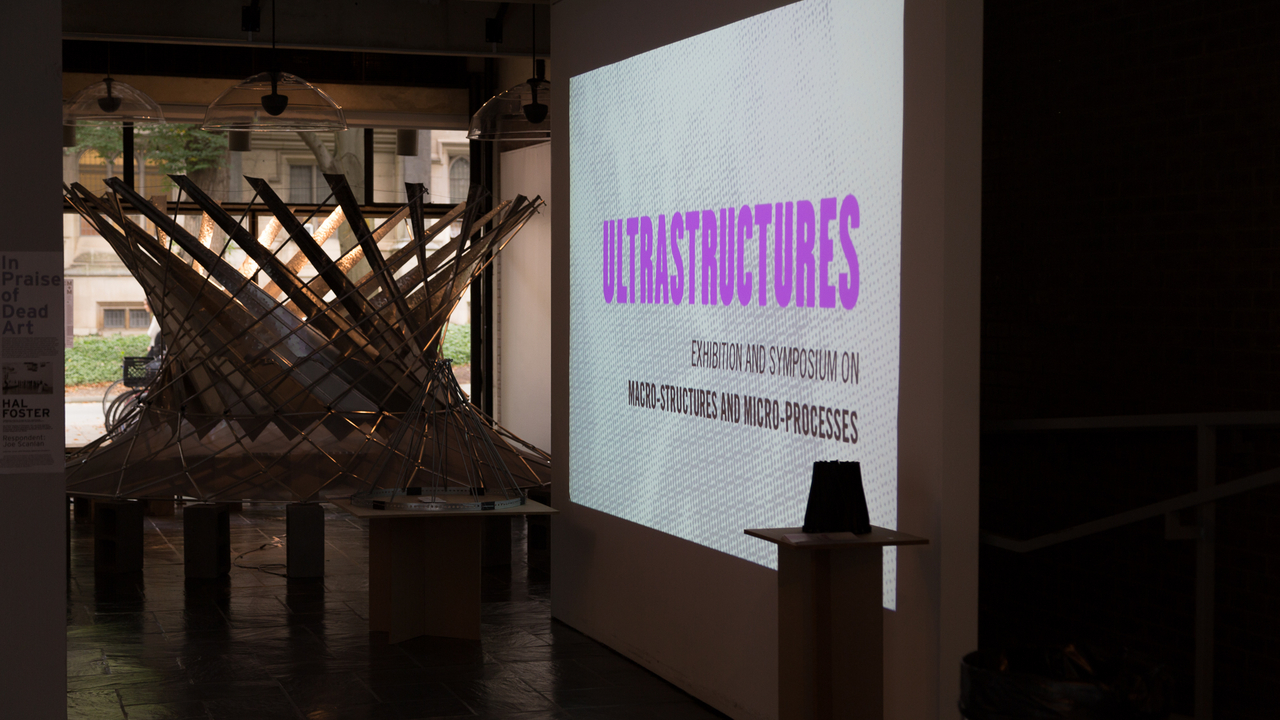 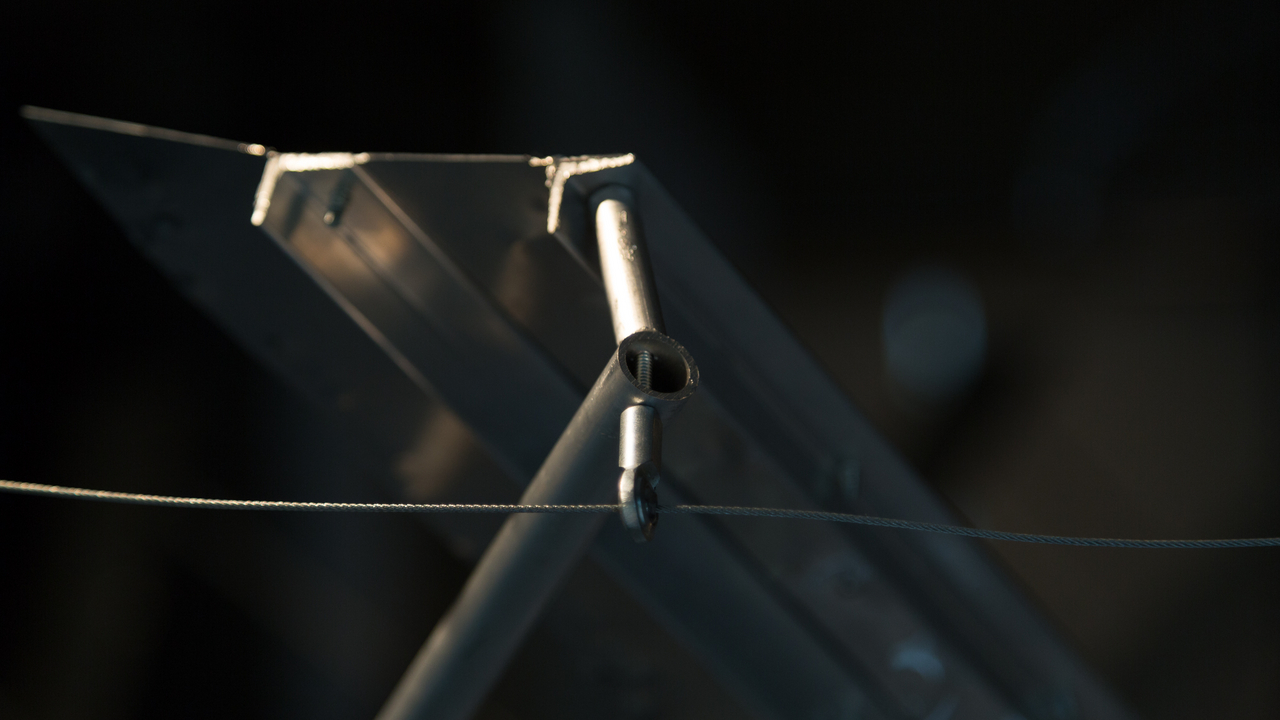 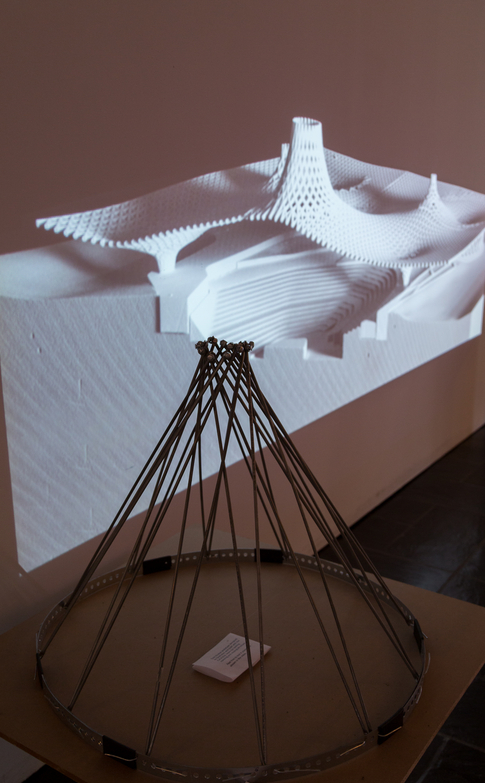 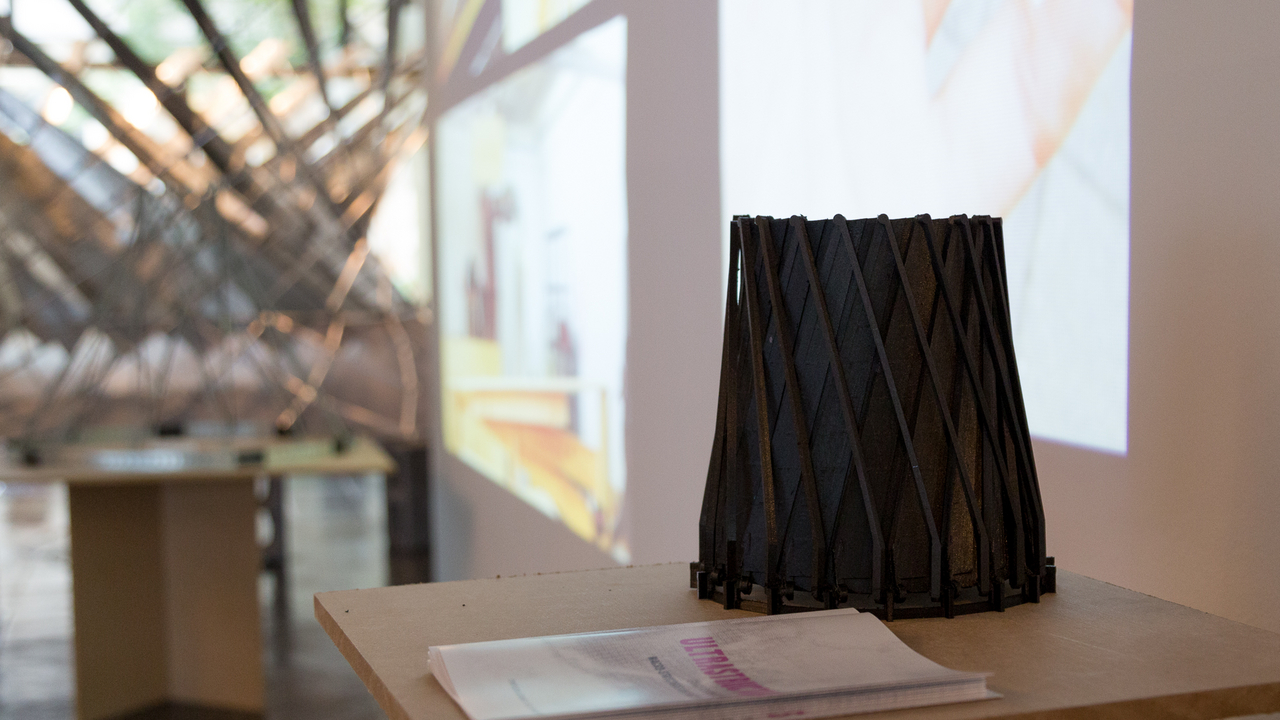 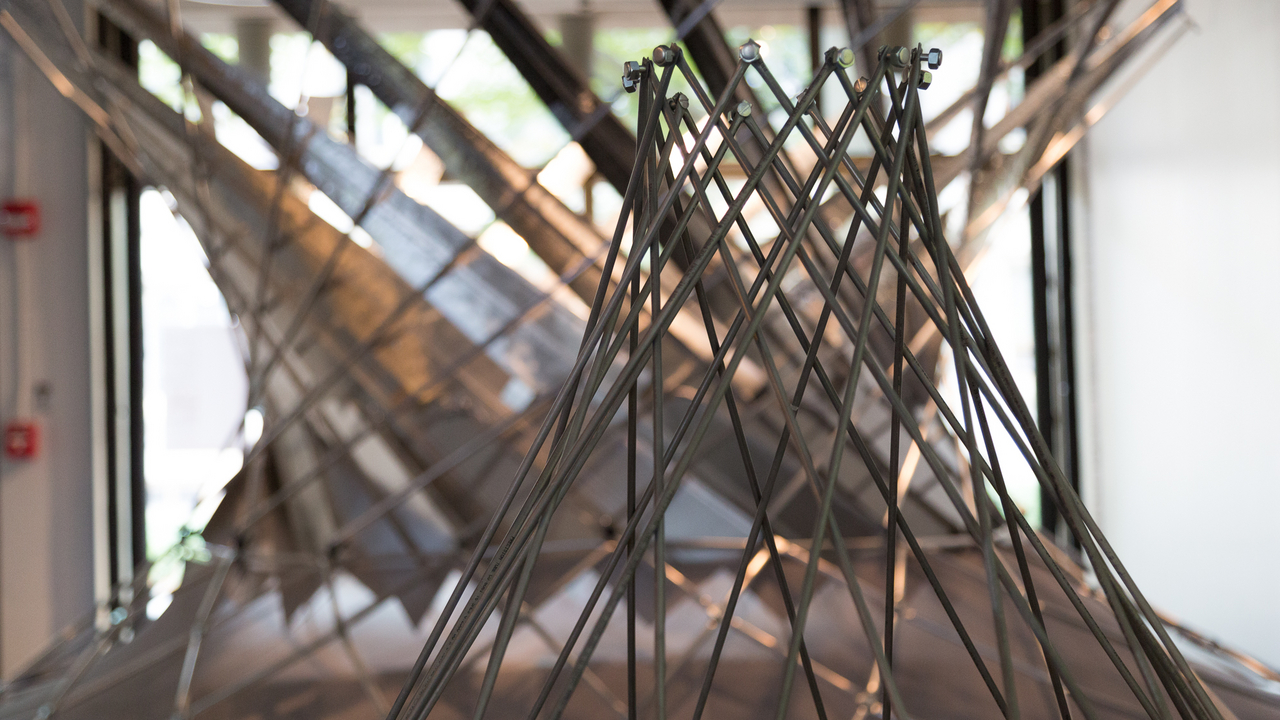 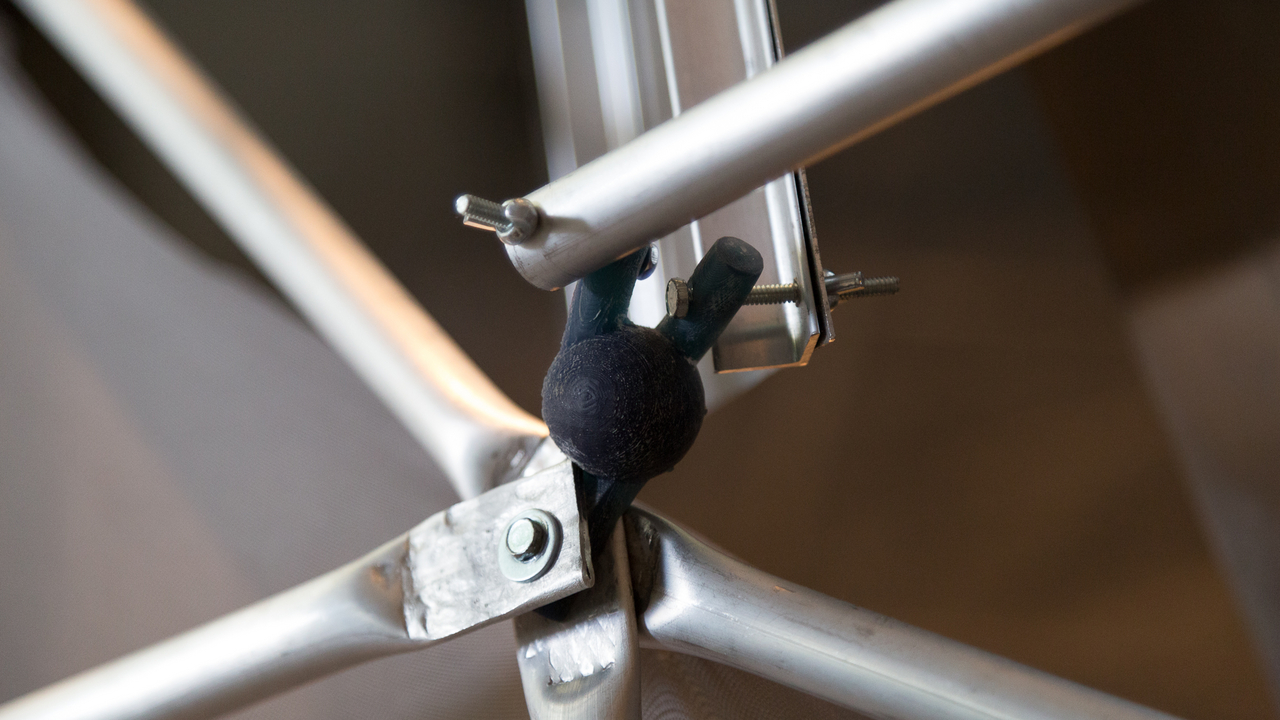 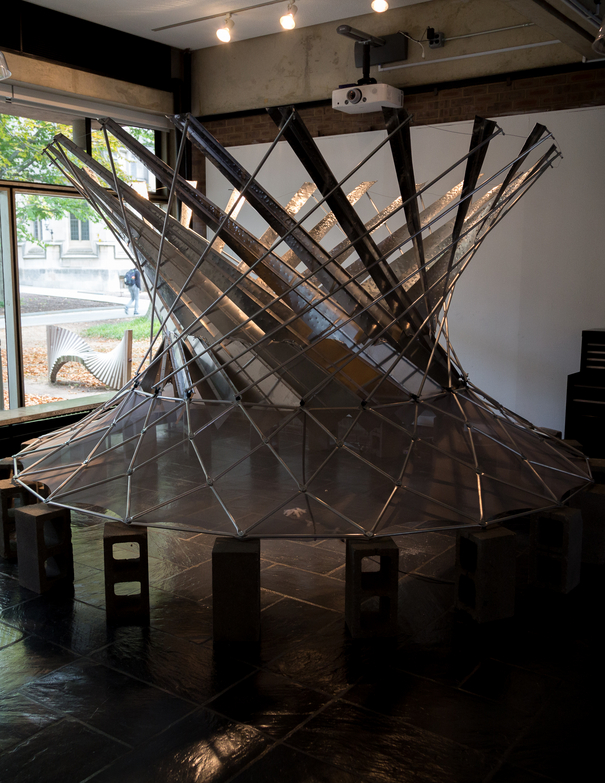 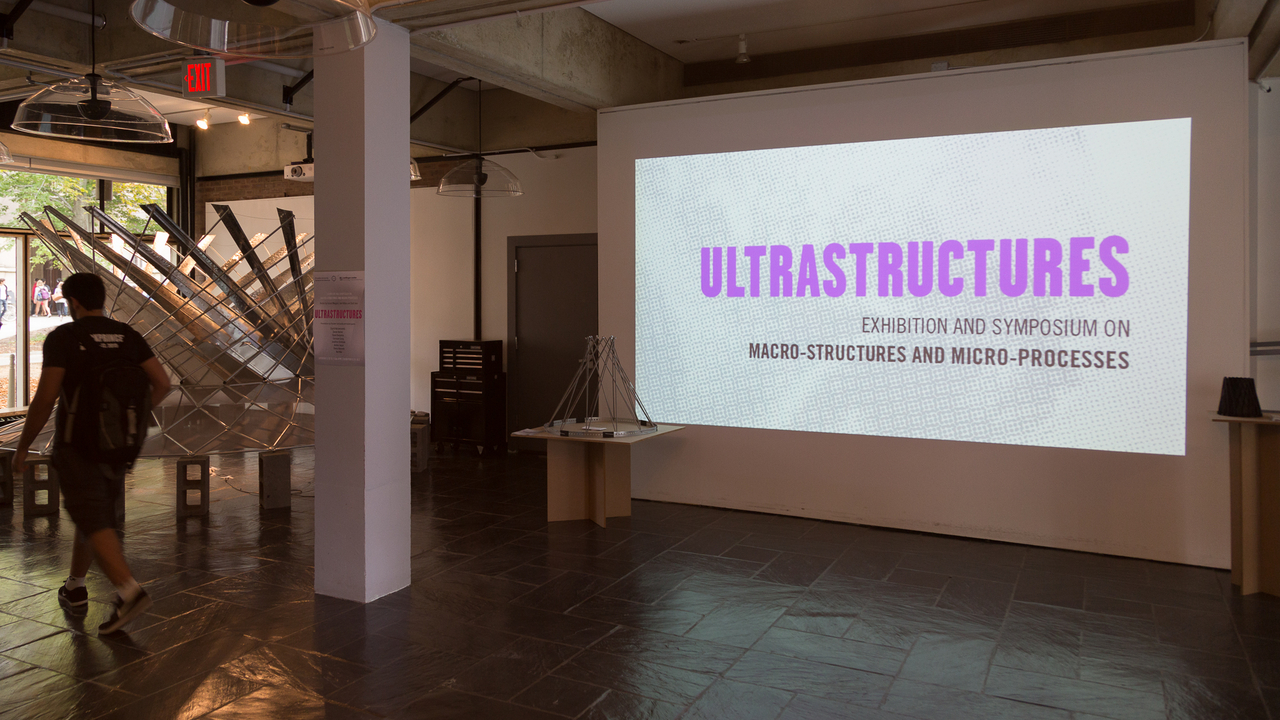 Ultrastructures is a conference and exhibition dedicated to exploring the union of formal design processes at the macro scale with fundamental physical processes at the micro scale. These physical processes lie in the domains of thermodynamics, heat and mass  ransfer, water filtration, and material science. In natural science ultrastructures refer to tiny biological organizations that help an organism survive in its environment. At the macro-scale realm of architecture and engineering, infrastructures refer to the basic physical and organizational structures and facilities needed for the operation of a society. This conference investigates how the design process can span the two scales, with the aid of computational tools and dynamic analytical inputs that link environmental processes to formal conception.

The two main projects featured in the exhibition, the Thermoheliodome and the Cool Oculus, investigate relationships between architectural form and radiant and evaporative cooling. Determinate cooling processes led to the design of structures that could be digitally fabricated and met geometric conditions for solar and reflected radiation, while instigating a formal exploration to maximize shading and air flow.

In the 1950’s, Professors Victor and Aladar Olgyay studied optimal heating and cooling in building design at the Princeton Architectural Laboratory, and built the Thermoheliodon, a device that could simulate the position of the sun on small models, and to which the Thermoheliodome pays homage with its name. The conference will celebrate the initiation of the renovation of the Princeton Architectural Laboratory and the historical body of research on architectural form and function that has taken place there. The new large wood-framed structure will house the Embodied Computation Laboratory outfitted with gantry system and anchors for large robots and fabrication to support advanced architectural research.

The Ultrastructures conference will bring together experts and pioneers in the field of architecture who have created new links to these fundamental domains, and help to make accessible new opportunities for architecture to engage the rapidly expanding body of underlying science that propagates through contemporary practice and process. Presentations will explore large-scale projects, prototypes and installations, all with a relationship to micro scale processes and material properties.

THERMOHELIODOME
Thermo: Studying thermal exchanges. Helio: relating to the sun and radiation. Dome: in the form of a cut dome.

The Thermoheliodome is an experimental thermal pavilion that cools occupants without air conditioning. Its dome form is derived from the helio-path of the sun to maximize shading combined with a computational geometric form finding process to maximize reflection of radiation emitted by occupants. It uses indirect evaporative cooling in a small cooling tower to produce water at the wet bulb temperature typically 10-20 °F below ambient temperatures. This water is piped through a series of coaxial pipes that protrude into the centerline of 55 inverted cones inside the dome. The cones where optimized to reflect radiation onto the pipes from occupants from the widest number of angles. They are lined with reflective sheets, which focus the radiation from the warm occupants on the cool bulbs. The result is the occupant has the sensation that it is cooler than what the outdoor air temperature would usually impart on them, and thereby cooling without air conditioning is achieved.

It is a 20’ x 32’ x 14’ experimental dome pavilion oriented to the suns path, which uses evaporative cooling tower to generate cold water piped to coaxial tubes acting as bulbs inside IR reflective cones generated by geometric model focusing radiant cooing on occupants and fabricated by robotic manufacture of 120+ blocks of foam glued together on its side to access the piping on its top and then tilted down on its floor.

COOL OCULUS
The Cool Oculus integrates two passive cooling strategies into one architectural system. These compliment one another on a day-night cycle in a desert climate. The project is a lightweight structure with a double-membrane envelope that is configured as a downdraft evaporative chimney. A light water mist emits from the chimney’s crown and humidifies the hot-dry air. This causes temperature drop and thus pulls cooled air into the space below. Hyperbolic geometry regulates airflow throughout the interior volume. In an arid climate of 100 degrees Fahrenheit this technology can cool interior air to 75 degrees Fahrenheit. At night, the chimney dilates to a larger diameter and exposes the ground slab to radiative cooing by the sky above. The slab acts as a thermal mass, slowly releasing coolness to its surrounding as air temperature rises during the day.

This project began as a Master’s thesis at Princeton University School of Architecture, where a conceptual model was developed based on airflow calculations and scale-model testing. The large-scale prototype on display display allows the performance, material and mechanical requirements of the system to be explored. This study was supported by a Tides Foundation grant in collaboration with the Andlinger Center for Energy and the Environment.

Supported by: Tides Foundation, Princeton University School of Architecture, the Andlinger Center for Energy and the Environment, and the C.H.A.O.S. Lab

For more information go to soa.princeton.edu/content/ultrastructures-conference