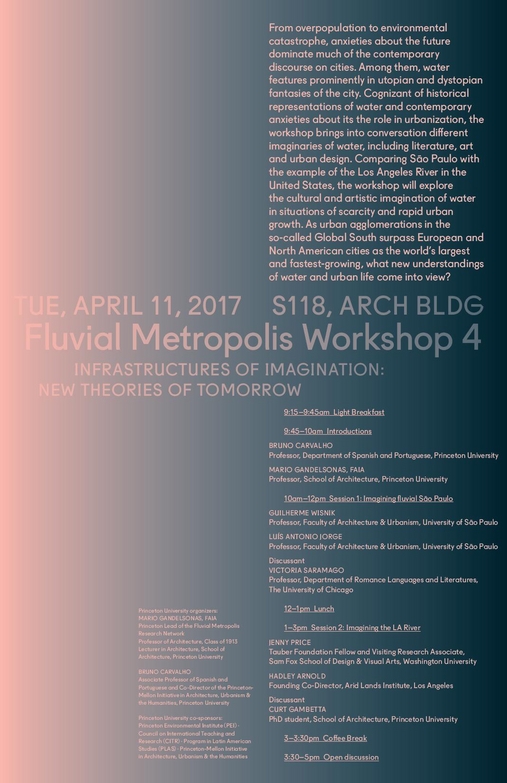 From overpopulation to environmental catastrophe, anxieties about the future dominate much of the contemporary discourse on cities. Among them, water features prominently in utopian and dystopian fantasies of the city. The workshop brought into conversation different imaginaries of water, including literature, art and urban design. Comparing São Paulo with the example of the Los Angeles River in the United States, the workshop explored the cultural and artistic imagination of water in situations of scarcity and rapid urban growth. As urban agglomerations in the so-called Global South surpass European and North American cities as the world’s largest and fastest-growing, new understandings of water and urban life came into view.

The Tietê River, which crosses the city of São Paulo, has a sui generis course. It is born near the coast, but instead of running directly to the sea, it is oriented towards the interior of the continent, reaching the coast only at the mouth of the River Plate, between Argentina and Uruguay. Its waterway, therefore, was fundamental for the voyages of conquest and exploration into the interior of the territory during the colonial period, stimulating continental integration. And although Brazil’s economic and territorial development in the 20th century has unfortunately ruled out river navigation as the basis for transportation and urbanization, it remains strong in the imagination of crucial works in the areas of architecture and the arts. Guilherme Wisnik presented an overview of these works, focusing more closely on a project by the architect Paulo Mendes da Rocha for the mouth of the River Plate.

During the first decades of 19th Century, foreign writers and travelers penned evocative accounts of rivers in Brazil. Their works offered different forms and procedures for the narration of space, including Euclides da Cunha’s important book, “Os Sertões” (“Rebellion in the Backlands”, English edition). In contrast to the aerial point of view assumed by Euclides (a bird’s view), I explore the optic of Guimarães Rosa (in “Grande Sertão: veredas” -“The Devil to Pay in the Backlands”, in English edition). Rosa’s vision is opposed to an aerial view and assumes the position of someone that strolls and walks by foot. Such narratives about space highlight the ambiguity of a river’s meaning: both to connect (the longitudinal sense) and to cut (the transversal sense). This dialectic guided the presentation of an urban design proposal for a bridge over the Tietê River, envisioned as an example of what a “Fluvial Metropolis” imaginary might look like.

To ask “how have people imagined the L.A. River” has always been to ask not only “how have people imagined L.A.” but also “how has L.A. been built” and “whom has L.A. been for.” In this talk, Jenny Price focused on how 21st-century writers, filmmakers, and other artists have been reimagining America’s most famous forgotten river amidst the hugely ambitious civic efforts to revitalize it.

As educators and professionals working in a changing climate, the challenge is not just to build better water projects. The challenge is to build capacity for better water thinking. How do we propose not only projects but programs and policies that advance an equitable and inspired built environment? In environmentally parched landscapes, how do we prioritize investments in water supply infrastructures? And how do we impregnate those infrastructures with the greatest potential civic benefits? The Arid Lands Institute is a research center devoted to design solutions in drylands. Hadley Arnold shared recent work on new tools for expanded capacity in drylands design practice, pedagogy, and public policy.