The Case of Concrete 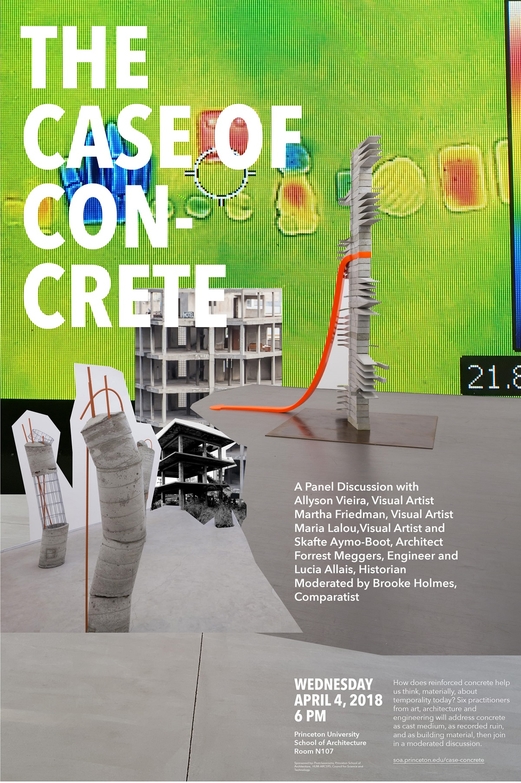 The Case of Concrete
A panel discussion

How does reinforced concrete help us think materially, about time? From the moment it was invented, this material seemed designed to convey a new longevity—a near-timeless abstraction. Today this abstraction is in question, and since the qualities of concrete have always been worked out in practice first, through making, this panel brings together six practitioners from art, architecture and engineering, to address concrete as cast medium, as recorded ruin, and as building material. Each will present ongoing work, then join in a moderated discussion.

Allyson Vieira, "Work Over Time"
Artist Allyson Vieira lives and works in New York. She received a BFA from The Cooper Union and an MFA in sculpture from Bard College. She has exhibited extensively both internationally and in the US, including institutional projects at Kunsthalle Basel, CH, Swiss Institute, NY, PinchukArtCentre, UA, Non-Objectif Sud, FR, Frieze Projects, NY, The Public Art Fund, NY, The Highline, NY, and SculptureCenter, NY. Her first major catalog, Allyson Vieira: The Plural Present, was published by Karma Books (2016), and her book of interviews with Greek master marble carvers, On the Rock: the Acropolis Interviews, is forthcoming from Soberscove Press (2018).

Maria Lalou & Skafte Aymo-Boot, “[Un]Finished”
Maria Lalou is a Greek artist based in Amsterdam and Athens. Her work focuses on the topic of “viewing” through large-scale installations, performances, and publications. She incorporates cinematic and surveillance apparatuses as her tools, with references to the politics of the viewer. Lalou holds a number of grants and awards and has presented her work internationally at Printed Matter (New York), Arti et Amicitiae (Amsterdam), Onomatopee (Eindhoven), and the 2nd Biennial of Thessaloniki, among others. She has contributed to the peer-reviewed journals activate (Roehampton University, London) and Leonardo (MIT). Lalou is currently an artist-in-residence at the International Studio and Curatorial Program (ISCP) in New York. Skafte Aymo-Boot is a Danish architect based in Amsterdam. In 2009 he founded NEZU AYMO architects together with the Japanese architect Yukiko Nezu. He has realized a wide variety of projects, and his work has won several first prizes and awards. He has presented his work in lectures at, among others, the School of Architecture at the Royal Academy of Art, Copenhagen, Universidad National, Bogotá, and TU Delft.

Since 2012, Lalou and Aymo-Boot have worked together on the project [UN]FINISHED, a continuous archival research project on the unfinished concrete buildings of Athens, engaging the viewer in a process of viewing parts of the void of the city’s history historically, socially, and politically. The project has been presented at Contemporary Art ReMap 4 (Athens), UNIDEE/Fondazione Pistoletto (Biella), The Symptom Project (Amfissa), as well as Università Iuav di Venezia and ETH Zürich, among others.

Martha Friedman, “False Body (Bingham Fluid)”
Martha Friedman is a visual artist. Across Friedman’s work is an interest in processes and materials that evoke the pleasures, anxieties, and vulnerabilities of having a body. Recent solo exhibitions of Friedman’s work have been held at The Institute of Fine Arts Great Hall, New York (Some Hags, 2016-2017); Locust Projects, Miami, FL (Pore, 2015-2016); Andrea Rosen Gallery, New York (Dancing Around Things, 2017) and Wallspace, New York (Caught, 2012), among others. She has an upcoming exhibition at The Henry Museum in Seattle (Martha Friedman: Castoffs, 2018). Friedman earned her BFA from the School of the Art Institute of Chicago and her MFA from Yale University School of Art. Friedman is a senior lecturer and Director of the Visual Arts Program at Princeton University. She lives and works in Greenpoint, Brooklyn.

Forrest Meggers & Lucia Allais, “Reinforced Concrete is 100 Years Old”
Lucia Allais is a historian and theorist of architecture whose first book, Designs of Destruction: The Making of Monuments in the Twentieth Century, will be published by the University of Chicago Press in 2018. She is an Assistant Professor of Architecture at Princeton University, a member of the Aggregate Architectural History Collective, and an editor of the journal Grey Room. Forrest Meggers is Assistant Professor at Princeton University, jointly appointed in the School of Architecture and the Andlinger Center for Energy and the Environment. At Princeton he co-directs the PhD track in computation and energy and leads the Architecture and Engineering program. As director of his CHAOS Lab (Cooling and Heating for Architecturally Optimized Systems), he leads a highly interdisciplinary research group developing new technologies, methods and forms for building systems. Meggers received his doctorate from ETH Zurich, and has published numerous peer-reviewed science papers on applied research, and has also written architectural journal articles and book chapters rethinking technology in architecture.Since 2017 Allais and Meggers are co-investigators of a project on materiality sponsored by the Council for Science and Technology, titled "What is a material?”

Moderated by: Brooke Holmes
Brooke Holmes is the Robert F. Goheen Professor in the Humanities, Professor of Classics, and Director of the Interdisciplinary PhD Program in the Humanities at Princeton University.  She is the author of The Symptom and the Subject (Princeton, 2010) and Gender: Antiquity and its Legacy (Oxford, 2012), three co-edited volumes—Aelius Aristides between Greece, Rome, and the Gods (Brill, 2008); Dynamic Reading (Oxford, 2012); and The Frontiers of Ancient Science (de Gruyter, 2015)—and the multi-authored, experimental book-exhibition Liquid Antiquity (DESTE, 2017), as well as numerous articles on Greek literature, the history of medicine and the body, and ancient philosophy.

Event sponsored by Postclassicisms, Princeton School of Architecture, HUM595, and Council for Science and Technology.