Symposium: The State Between 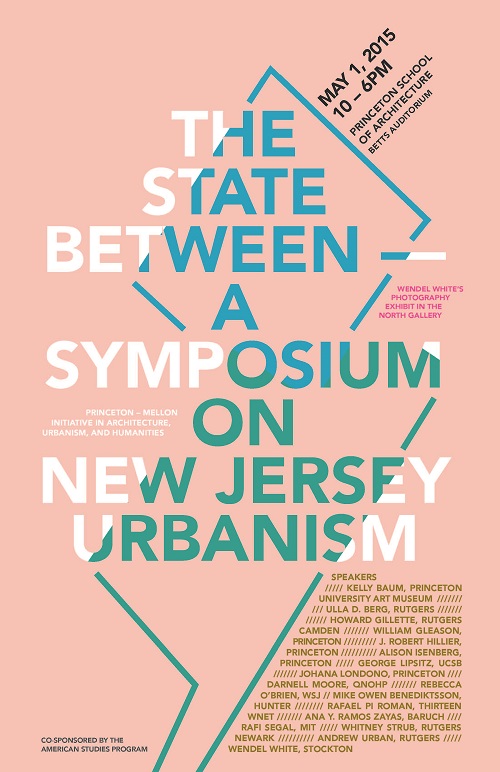 The State Between – A Symposium on New Jersey Urbanism
Princeton University School of Architecture
Betts Auditorium / May 1, 2015 / 10a-6p
See video below.

In the celebrated song "New York, New York," Frank Sinatra’s yearning for success in the big city captures the aspirations of many in his hometown, Hoboken, New Jersey. With only four large cities in the state (the largest, Newark, has a population of about 270,000 people), Hobokenites aren’t the only ones suffering the “little town blues.” Jerseyans are known for wanting to escape to livelier places, but just as people leave, newcomers arrive looking for less expensive real estate, the American Dream in the suburbs, political refuge and employment. In- and out-migration shapes the state’s urban space, producing new built environments, commuting streams, transnational communities, and ethnic and racial concentrations. Global industrial restructuring, national political movements, and national immigration policies condition these population flows and impact the state’s urban spaces.

This symposium joins scholars and practitioners from multiple disciplines and professional fields for a discussion on the global, metropolitan, and local forces and actors that shape New Jersey’s urban cultures, communities, and built environments. By thinking of New Jersey as a constructed object of representation and research, we seek to unpack the methods, units of analysis, archives, and other sources that reveal how New Jersey’s spatial imaginary is constituted within the state and beyond.

6:00-7:30PM / Ferguson as a Failure of the Humanities a public lecture by George Lipsitz
Organized by the Center for African American Studies / Stanhope Hall, 201 / RSVP to Dionne Worthy

Visiting Princeton University
Map to the School of Architecture

The State Between is organized by Princeton-Mellon Fellow, Johana Londoño and made possible by the Princeton-Mellon Initiative in Architecture, Urbanism & the Humanities. Additional support comes from the Program in American Studies at Princeton University.